"Pit Lord" redirects here. For the Warcraft III hero, see Pit Lord (Warcraft III).
Not to be confused with Annihilon.

The annihilan, commonly known as pit lords (or pitlords),[2] are a powerful species of demon recruited by Kil'jaeden[1] to serve the Burning Legion. Their leader, the most feared of them all, was Mannoroth the Destructor.

These colossal destroyers serve as the Legion's military commanders. They are as cruel as they are powerful - and revel in the destruction of all that exists.[3] They are known to use felhounds to sniff out sources of magic wherever they be found.[4]

The annihilan are one of the demonic species that were naturally born from the chaotic astral realm known as the Twisting Nether. Unlike the cunning nathrezim, who preferred to infiltrate and manipulate mortal civilizations, the pit lords took a more direct approach to conquering worlds. Existing only to brutalize and torture any mortal crossing their path, the annihilan often enslaved the lesser demons of the Nether, using them as fodder to besiege the mortal civilizations of the Great Dark.[5]

At some unspecified point in time, Kil'jaeden recruited the annihilan into the Burning Legion, an invitation the pit lords readily accepted.[1] Though they were recruited by Kil'jaeden, it was Archimonde who empowered the pit lords to serve as living siege engines and inspire dread in all those they faced.[6][7][8]

Annihilan are rarely seen on the battlefield, since they are too important to simply waste in combat. The only two annihilan that entered Azeroth during the War of the Ancients and the Third War were Mannoroth and Azgalor, so it is presumed that the annihilan are either generals for smaller forces of the Burning Legion or are still on the Legion's homeworld.

Mannoroth's blood was used to forge a blood-pact with the corrupted orcs on Draenor, making their corruption permanent — only one clan, the Frostwolves, escaped. During the Burning Legion's second invasion, Thrall and Grommash Hellscream defeated Mannoroth, and broke the blood pact he had forged and thus freed the Orcs from demonic corruption. Hellscream did not survive the encounter. 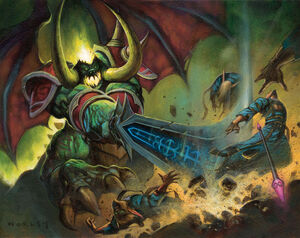 The Pit Lords who serve under Mannoroth the Destructor are some of the most cruel, barbarous butchers to ever roam the trackless wastes of the Twisting Nether. These hulking engines of hate and death love only to kill and bring sorrow to all living creatures. Fanatically loyal to Mannoroth, the pit lords will stop at nothing to see the will of the Legion upheld.[9] These massive demons take sadistic pleasure from instilling crazed terror, and then slaughtering their enemies.[10]

As a demonic species, pit lords, after being defeated, return to the Twisting Nether to reconstruct themselves.

The annihilan pit lords are described as engines of destruction. They are driven by pure rage and bloodlust. Their bodies resemble massive lizards, with six powerful limbs (four legs, similar in nature to the children of Cenarius), a tail, and wings sprouting from their backs (the wings are vestigial and occasionally used for defense — even with eredar magic, pit lords are far too heavy to fly, except in the non-canon RPG). Their upper torsos are more humanoid, with a large chest, two arms and a large horned head. Their mouths are filled with rows of teeth, their eyes are on fire and even their tongues are studded with fangs. Two long, mammoth-like tusks sprout from both sides of their mouth. The preferred weapon of the pit lords is a massive double-bladed polearm. Though they may look fat and lazy, they are unimaginably powerful. The Warcraft III model had beards, but the cinematic and WoW models do not.

A handful of annihilan, such as Mongrethod or Brutallus, have been shown with a different, more battle-scarred and somewhat corpse-like. They possess no wings or forearms, the former being torn off completely, and the latter being replaced with massive blades in a manner similar to the Shattered Hand orcs. They also feature a broken tusk, and spikes impaling the other tusk, and multiple burning scars. These annihilan seem possibly even more wrathful and murderous, perhaps as a side-effect of their deterioration. This look does appear to be a permanent alteration as well, as Brutallus still features this look when he returns at the end of the Broken Shore.

Annihilan blood has been shown to be extremely potent. As noted above, Mannoroth's blood was used to seal the pact with the orcs; Magtheridon's was used to create fel orcs; Aggonar's corrupted a sacred draenei area; and Brutallus' raised the blue dragon Madrigosa from the dead in the form of Felmyst.

The hide of Magtheridon is described as thick, with the Warglaives of Azzinoth wielded by Illidan barely able to penetrate more than a few inches.[11] This, and the portrayals of first deaths of Mannoroth and Azgoth show their bodies are thick and when damaged, cause explosions and they die.

Annihilan hide can be crafted into armor,[16] and their fel glands can be extracted to make a very deadly poison.[17] 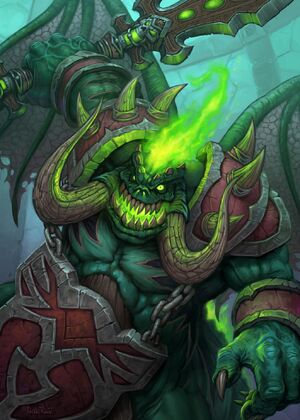 As with other demonic races, the precise hierarchy of the annihilan is unknown. However, there is information on a few of the annihilan pit lords, as several fought in the Third War and died on Azeroth.

After Mannoroth's death, Azgalor became the new general of the Legion's ground forces on Azeroth at the Battle of Mount Hyjal.[19] They are known to be barbarians.

The term "pit lord" may be a class or rank within the annihilan species or the Common name for the species.[3]

Nothing is known of the culture of the annihilan, but it is likely one where raw power is valued above all else. While Mannoroth was certainly quite powerful, he probably rose to become their leader through his cunning and magical knowledge — he is said to have been as skilled as a mid-level eredar. Besides Magtheridon, no other pit lord has shown particular affinity for the arcane arts, though many of them know the 'fel firestorm' spell.