Anub'Rekhan is a Crypt lord boss in Naxxramas who replicates extremely well the abilities of the Warcraft III Crypt Lords.

If a person outside of 35 yards is targeted, the impale will not harm this person, but it will still affect anyone else in the path of the attack. This will be what will cause most non-tanks to die, and can be easily healed through with alert healers and/or self-healing, and minimized if the raid group spreads out. The fall damage may also be mitigated by class abilities such as

Note: The Locust Swarm attack has an approximately 90 second cooldown, however the first cast is not at a set time, between 80 seconds and 2 minutes. As well, the Locust Swarm is not a normal silence. Unlike a normal silence, it prevents the use of all abilities (even auto-attack). This means that the MT cannot use Shield Wall or Last Stand to save himself if he gets stacked too high. Items, however, are still able to be used (this includes Lifegiving Gem).

The key to avoiding the Locust Swarm is to have the MT visually spot that attack occurring. The only cue to this attack is to watch Anub'rekhan lift his tail into the air, almost bowing at the MT. After the tail lift, the MT has about 2 seconds to get out of range before the DoT begins to be applied. There is no emote associated with this attack, but it can be detected by SpellAlert type addons. Specifically, the CHAT_MSG_SPELL_CREATURE_VS_CREATURE_BUFF event fires when he begins to cast, but the client can only pick it up from melee range.

There will be two adds that start the fight with Anub'Rekhan, they each have around 200,000 health. They will need to be killed first before DPS engages the boss. With a balanced raid, they should each take 30 seconds to kill.

Note: Aggro seems to work differently than normal mobs. Once the add is on a target, dps alone will most likely kill it before aggro is transferred to the DPSer. This can lead to a wipe if several loose bugs aggro the hunter or tank shortly before locust swarm.

The Pull and Initial Positioning

There are two spots to tank Anub'Rekhan; where he stands when you engage him, or pulled back by a hunter to the entry-way of the room. After he is pulled into position, the MT should face Anub'Rekhan towards the East, the reasoning for this is explained in the next section.

The two Crypt Guards need to be tanked as close as possible to their initial positions, with them facing away from the DPS to avoid cleaves. Since they are very susceptible to stuns, rogues and warriors should be trying to keep him stun-locked in place while DPS takes them down first.

The two Crypt Guards need to be tanked orthogonally from Anub'Rekhan, facing away from the DPS. That is to say, if you have plane in three dimensional space, a vector is orthogonal to the plane if it is perpendicular to every vector contained in the plane.

The left Guard should be taken out first, and his tank should not be getting more than 3-4 applications of the poison DoT. If he is, then the stuns need to better timed, or a second warrior needs to be taunting. Meanwhile, the two tanks for the right Guard should be bouncing aggro back and forth with taunts to avoid the DoT stacking too high. DPS finishes off the left Guard before coming over to kill the right the same way.

At this point the first corpse may have exploded into scarabs. If so, have Mages frost nova them into place before Warlocks/Mages AoE them down.

After the right Guard dies, you should be 60–75 seconds into the fight. Only ranged DPS can go onto Anub'Rekhan before the first kite. Melee should stand on the corpse, picking up scarabs if it explodes, they would only have about 10 seconds to do damage before they would need to back out for the Locust Swarm. 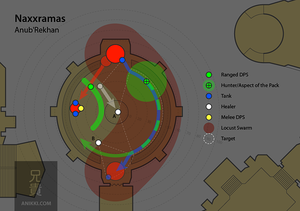 The Kite and Spawn

The most important part of the fight is the kiting that needs to occur every 70–120 seconds. Keep a timer going after each Locust Swarm cast.

As soon as Anub'Rekhan bows at the MT, signaling the beginning of Locust Swarm, the MT must immediately start running around the east side ring of the room, just beyond the poison slime ring. The MT should stop running when he reaches 12/6 O'Clock, depending on where you initially tanked him. Everyone else needs to back out of the 30 yard range of the Swarm, including MT healers.

As soon as the MT starts running, the Hunter in his group must also turn on Aspect of the Pack and run ahead of him around the same outer ring and turning off Aspect when the MT is in the 12/6 O'Clock position. If done properly, only 1-2 applications of Locust Swarm should be on the MT, just enough to be healed through.

Reaction time to the tail lift is crucial to surviving each kite, a 2 second delay will spell a wipe for the raid. It is also just as important that the tank avoid stepping into the slime ring, as it will put a debuff reducing all stats to 10% of normal, effectively dropping his max health by 5-6000 points.

At the same time the Locust Swarm is cast, a brand new Crypt Guard will spawn at Anub'Rekhan's initial engage point. This add should be pulled towards the western part of the room, to stay out of range of the Locust Swarm, and is killed identically to how the first two were brought down. After the newly spawned Guard is killed, all DPS can go back onto Anub'Rekhan, again, having 2 mages keep an eye out for scarabs. If done quickly and efficiently, this leaves 45 seconds of straight DPS on Anub'Rekhan before melee must back out and the next kite and spawn occurs.

70–80 seconds after each Locust Swarm cast, all melee DPS needs to back out of range and prepare for the next Crypt Guard spawn. If you are on a relatively lag-free server, you can leave Melee in there a little longer, and have them react similarly to the MT.

Rinse and repeat 7-10 times to bring Anub'Rekhan down and collect your first (probably) Tier 3 quest pieces. As you gain more and more practice on it, you can kill him in as little as 5-6 kites.

As of the first week on the live servers, an evade bug exists when the MT gets impaled. t is currently unknown what causes Anub'Rekhan to evade, but several theories have been formed.

From experience where he impaled the MT, if the MT is too close to any wall or the slime edge, unknown why, but this dramatically increases the chance to impale-evade, tanking him in the dead middle of the tankable ends of the room appears to eliminate the problem. (I for one had the evade happen to me twice in 1 attempt, changed the position the following attempts and been impaled without issue.)

Killing a player
Shhh... it will all be over soon.