“I was king of this empire once, long ago. In life I stood as champion. In death I returned as conqueror. Now I protect the kingdom once more. Ironic, yes?”

Anub'arak was the last king of the nerubian empire of Azjol-Nerub. He was among the nerubians slaughtered in the War of the Spider and later raised by Ner'zhul the Lich King as undead crypt lord to do his bidding. When the Lich King began losing his powers, Anub'arak assisted Arthas Menethil in reaching Icecrown before Illidan Stormrage's forces. For years, the undead nerubian continued carrying out his master's will in the ruins of his former kingdom until he was slain by adventurers. He was later raised once more and relocated to the caverns below Icecrown to plague the Argent Tournament, but the so-called traitor king met his final end at the hands of adventurers partaking in the tournament.[1]

Anub'arak was the king of the nerubians when the Lich King arrived in Northrend. During that time, the spiderlord Anub'Rekhan was his most loyal commander.[2]

Eventually, the War of the Spider pitted the nerubians against the Lich King's forces, with any attempts to spread the Plague of Undeath being ruthlessly snuffed out by Anub'arak. Seeing no way to subvert their defenses the Lich King settled on smashing the nerubians into rubble. Despite the strength and cunning of the nerubian army, the Lich King's minions were endless. When the time came the Lich King was delighted to raise Anub'arak himself into a powerful undead minion. The former ruler was now a slave, and though he chafed at his leash, he could not free himself from it.[3]

As an undead crypt lord, Anub'arak crushed anything that posed a resistance to the Lich King's will and slaughtered many of his people. Anub'arak led the undead as they conquered the nerubian ziggurats and repurposed them for the Lich King's designs. For this, the living nerubians began to refer to him as the traitor king.[4]

Some time before the Third War, Anub'arak escorted Kel'Thuzad through Azjol-Nerub and Naxxramas, and Kel'Thuzad referred to him as a majordomo.[5] 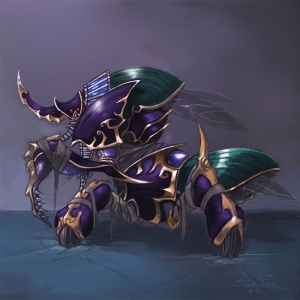 Artwork from Warcraft III: The Frozen Throne, by Samwise Didier.

Following the death of Archimonde, Anub'arak was sent to meet Arthas Menethil when he arrived in Northrend. Anub'arak saved Arthas from an attack by blood elves, before he introduced himself and told Arthas of Ner'zhul's plans. Anub'arak helped Arthas to establish a base, and then masterminded the attack on the blue dragon Sapphiron. Anub'arak told Arthas that it would take far too long to fight their way through Kael'thas and Vashj's expansive forces, and formulated a plan to go through the underground ruins of Azjol-Nerub to reach Icecrown, but warned that it would be a perilous journey.[6]

Anub'arak led Arthas into the ruined Nerubian Empire, negating many perilous traps along the way, but all the while, he fought many of his former subjects, the living nerubians, who called him the traitor king for serving the Lich King, who had destroyed Azjol-Nerub.[6]

When they entered the kingdom, they encountered survivors of Muradin's expedition. Their new leader, Baelgun, reported that an ancient evil had been released beneath the kingdom, and that he would not allow anyone to open the Inner Kingdom's doors. Anub'arak and Arthas defeated the troublesome dwarves and broke into the Inner Kingdom.[7] Soon, they came upon the evil the dwarves had spoken of - the faceless ones - strange, malformed creatures who had been imprisoned beneath the earth in ages long forgotten. They even faced off with a forgotten one, a creature of great power and resilience.[8]

Upon entering the Upper Kingdom, an earthquake separated Anub'arak from Arthas, and Anub'arak and his minions fervently dug through the rubble to get to Arthas before he was slain by one of the many booby traps laden throughout the halls of Azjol-Nerub's Upper Kingdom.[9] Anub'arak was impressed by Arthas's resilience when he found him, and quickly ushered him out of Azjol-Nerub and to the surface, where they engaged with Illidan Stormrage and his servants in a battle for the Frozen Throne.[10]

During the battle, Anub'arak defended Arthas as he magically activated the four obelisks surrounding Icecrown's pinnacle. Once all four were active, Anub'arak stood by as Arthas climbed the stairs to his destiny.[10] 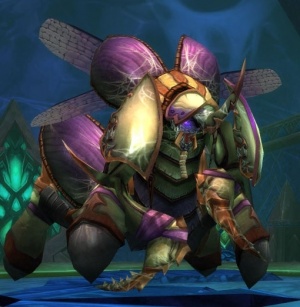 Anub'arak in the Brood Pit of Azjol-Nerub.

In World of Warcraft: Wrath of the Lich King, Azjol-Nerub is comprised of two 5-man dungeons: Azjol-Nerub and Ahn'kahet. Anub'arak is the final boss of the first dungeon.

Anub'arak made his home in the once proud kingdom of Azjol-Nerub. After his betrayal, he twisted and perverted his former homeland into a wretched squalor and ruled over an army of undead nerubians who, like their leader, had pledged themselves to serving the Lich King. Kilix the Unraveler ordered the death of Anub'arak.[11]

Trial of the Crusader

Following his defeat in Azjol-Nerub, Anub'arak was resurrected by the Lich King (again) and enhanced with frost-related powers. He was sent to plague the Argent Tournament, and resides within the the Icy Depths beneath the Crusaders' Coliseum, where he serves as the final encounter during the Trials of the Crusader and Grand Crusader.

Anub'arak: The nerubian race, yes. Then the master came. As his influence spread, we made war upon him, foolishly believing we stood a chance. Many of us were slain and raised into undeath. In life I was a king. Today I am a crypt lord.
Kel'Thuzad: In return for immortality, you agreed to serve him. Remarkable.
Anub'arak: 'Agreed' implies choice. 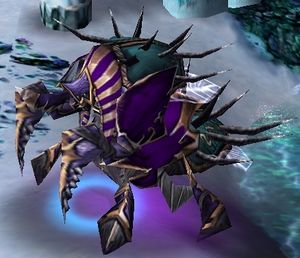 King Arthas: Who? Me?
Anub'arak: He is referring to me, death knight.

King Arthas: What?
Anub'arak: They are the Faceless Ones...

"I once ruled Azjol-Nerub. Then came a war I could not win. I was forced into servitude. But here, in this strange place, no one commands my POWER! I will conquer the Nexussss! Those who oppose me shall embrace the web of death. I am Anub'arak. I ruled once before. I shall rule again!"

Servitude to the Lich King

In Road to Damnation, when Kel'Thuzad remarked that Anub'arak had agreed to give himself to the Scourge in exchange for immortality, he answered: "'Agreed' implies choice." After that, Kel'Thuzad realized that the Lich King can compel obedience from the undead.[12] In Arthas: Rise of the Lich King, Arthas detected the vaguest stirring of resentment in Anub'arak's voice. He speculated that Anub'arak served only because he had to, and would turn on the Lich King if he was able to do so.[13]

In Azjol-Nerub, his quote upon death is, "Ahhh... RAAAAAGH! Never thought... I would be free of him...", confirming that Anub'arak had been an unwilling slave. The Lich King raised Anub'arak again, following his defeat at Azjol-Nerub, to kill the champions of the Crusaders' Coliseum. Anub'arak appeared grateful to serve his master there, though that may have been forced obedience.

The living nerubians do not view those who fell defending Azjol-Nerub from the Scourge as traitors,[14] but they frequently refer to Anub'arak as the "traitor king".[15] Anub'arak may have betrayed his people in some way (as crypt lords in general did)[16] only to find himself regretting that decision later. Since the nerubians only began using the "traitor king" title after Anub'arak returned to lead the undead against them,[4] it also possible that Anub'arak was held to a different standard and blamed for his deeds in undeath while other fallen nerubians (like Krik'thir) were not.

The Ultimate Visual Guide says Anub'arak was killed in the War of the Spider, raised into a crypt lord, and turned against his people in death. Although he was a servant of the Lich King, he was not a willing one.

In his Heroes of the Storm trailer, Anub'arak expresses his resentment over being forced into servitude and his desire to be a ruler once again.[4]

Statements of a bigger role 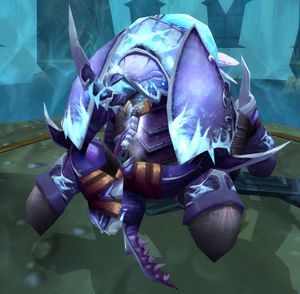 Anub'arak in the Icy Depths beneath the Crusaders' Coliseum.

Statements made before the release of Wrath of the Lich King hinted that Anub'arak was going to play a larger role:

This may have referred to the cut Azjol-Nerub zone, but Anub'arak went on to re-appear as the final boss of the Trial of the Crusader raid.