For the anubisaths in Ny'alotha, see Anubisath Sentinel (Ny'alotha, the Waking City). 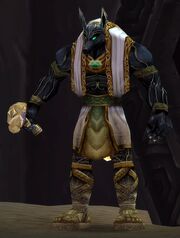 Anubisath Sentinels have a normal attack that hits for 600 - 800 damage and one random ability. The abilities are:

When any one sentinel dies, the remaining sentinels gain the ability of the fallen sentinel and are healed for 50% of their max health. This means the last sentinel will have 4 abilities.

You must prioritize which abilities will be the worst to have on more than one of the sentinels.

First priority on killing should be either knockback or ones that heal. Mortal strike is pretty mana intensive to heal through on multiple tanks, but in the case of multiple AoE sentinels, this should be killed earlier rather than later. The shadowbolt volley is avoidable if you stand in melee range, so as long as you don't have a mana burn or thunderclap stacked with it, it is easy to deal with if you spread out the mobs so you are either in melee or out of range of the volley. Thunderclap is not difficult if you spread out the sentinels, but if they become stacked on top of each other, it is a raid wiper.

The Anubisath Sentinel appears as a common card in the League of Explorers adventure for Hearthstone. Its flavor text reads: "He's actually a 1/1 who picked up the hammer from the last guy."