For the descendants of Modimus Anvilmar, see Anvilmar family. 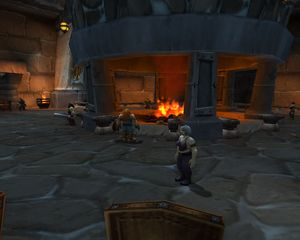 The forge of Anvilmar.

Anvilmar (also known as building A3)[1] is the first settlement of significance encountered by starting dwarves. It lies to the north in Coldridge Valley and has a set of trainers and some quest givers, as well as a few vendors. The central structure of Anvilmar houses a large forge, although there are no tradeskill trainers present.

Anvilmar is a dwarven smithing center in Coldridge Valley. Miners draw ore from the fertile mountains, and Anvilmar's numerous craftsmen mold it into fine works. The town is a welcome respite from the cold wilderness, and weary travelers can purchase excellent dwarven weapons and armor. Brann Bronzebeard's mithril mail comes from Anvilmar, and it has saved his life many times over.[2]

It was probably named after the great king Modimus Anvilmar or just the Anvilmar family.