For strategy on the encounter in Sethekk Halls, see Anzu (tactics).

Anzu is a dread raven god deeply tied to the arakkoa and the history of the Spires of Arak.

While physically Anzu was meager compared to his counterpart, Rukhmar, he possessed a great intellect. As opposed to Rukhmar loving the sun and sky, Anzu preferred the cool of the shade and the peace of the twilight hours where he could be alone in quiet contemplation. He would converse with the "gods of the abyss", and he would find them dull, witless creatures. Anzu was cursed by Sethe, the wind serpent god, and is no longer capable of flight.[1] His will has been broken and dominated by the Sethekk cult,[2][3] who have brought him out of the world of shadows to attack the Emerald Dream.[4]

His children were the dread ravens.

The Spirit of Life that saturated the world of Draenor birthed many kinds of animals, but almost all of them were consumed by the Evergrowth and the Sporemounds. But with the end of the Evergrowth by the colossals, life had a chance to thrive on Draenor once more, and the remains of Botaan became forests that teemed with Spirit and accelerated the development of new species. The first to arise were enormous creatures with extraordinary power over the land: some tapped into the power of nature, some the elements, and others the Light and Void. Yet survival was a challenge because of the Primals and Breakers, and winged species proved to be most suited to thrive on Draenor for they could fly out of reach of both forces. Most of Draenor's avians developed in a region called Arak, dominated by a massive spire that towered over dense woods. Three godlike creatures who took form in Arak were Anzu, Rukhmar, and Sethe.[5]

Anzu was much smaller than Rukhmar or Sethe. What he lacked in physical power, he made up for with a keen intellect. Ever curious, Anzu investigated the ley lines that crisscrossed the world and discovered arcane magic. For ages, the three largely kept to themselves, fighting off attacks from Primals and Breakers. Only Anzu dreamed of a better world for him and his feathered kin. He called on Rukhmar and Sethe to work together to transform Arak into a sanctuary for winged creatures of all kinds. As one, Anzu and his allies drove the children of stone and root from Arak. With the Primals and Breakers gone, Arak became a haven for winged species. Anzu, Rukhmar, and Sethe settled in as caretakers of the land and its varied species. Anzu watched over the multitude of lesser ravens that lived throughout Arak. He frequented the forest canopies below the spire. All seemed well in Arak, but darkness was stirring near the spire.[5]

At an unknown point in the past, Anzu had his followers seal three rival bird spirits - the eagle, the falcon, and the hawk - in stone statues.[6]

Over the years, Sethe became envious of Rukhmar. He coveted the favor of the wind and the warmth of the sun that Anzu and Rukhmar had. Sethe believed Anzu was also jealous of Rukhmar who looked down on them from the spire, and tried to convince Anzu to help him slay her, but Anzu was cunning and cared little for the wind serpents. In addition, he had a secret affection for Rukhmar but never mustered the courage to confess his feelings.[5] In the dark of the night, he sent one of his dread ravens to warn Rukhmar of Sethe's plot. Anzu watched from the top of a mountain spire as Rukhmar and Sethe clashed. Thanks to Anzu's warning, Rukhmar avoided Sethe. She flew high, put the sun at her back, and dove at Sethe. With a flap of her wings, she split the sky upon Sethe like the crack of a whip. Sethe crashed into the spire where they fought with such force that it crumbled and fell around him, creating the Broken Spire.

Anzu felt Sethe's hatred coursing through him. His body contorted, his wings shriveled, and he became cursed without flight. His mind was wracked with painful visions. Anzu had contained Sethe's curse by taking it upon himself, and he would grapple with the curse for some time.[1] In revenge, Anzu had his dread ravens slaughter Sethe's wind serpents; in one bloody night, Sethe's children were eradicated.[7][8] Anzu could not bear to present himself to Rukhmar, for if she had not seen him worthy before then surely she would now be disgusted by the aberration he had become. He disappeared into the forest deeps, and he ignored Rukhmar whenever she called for Anzu to show himself.[5] 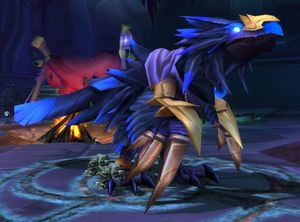 Anzu in World of Warcraft.

Though Sethe's curse weakened Anzu, it also gave him new power: the power of the Void that Sethe had once commanded. As Anzu grew more familiar with his abilities, he shrouded himself in a realm of shadow to hide from Rukhmar forever.[5] He left his consort Ka'alu to lead the dread ravens.[9] Rukhmar decided that if she could not find Anzu to thank him, then she would reward his sacrifice by creating a new race in his honor. Using her own life energies, Rukhmar transformed some of her kaliri followers into the arakkoa: "heirs of Arak". They embodied Rukhmar's physical grace and majesty, as well as Anzu's intellect and cleverness.[5]

When the great Talon King Terokk was tossed into the Sethekk Hollow and was afflicted by Sethe's curse, Anzu saved him from despair and granted him and his followers both arcane sorcery and powers over the darkness.[10] Together, Anzu, Terokk, and the new Talonpriests built the city of Skettis as a refuge for those unwanted by Rukhmar. Terokk used

[The Eye of Anzu] to communicate with him. But even as Anzu was worshiped by the Arakkoa Outcasts the Sethekk cult attempted to bring him back to the physical world and put him under their control.[2][3]

The Sethekk ultimately succeeded in their goal following the destruction of Draenor, summoning Anzu's still-cursed physical form to Outland so that he may attack the Emerald Dream.[4] The Arakkoa Outcasts, who have since become the Skettis arakkoa, no longer worship Anzu, with his only followers being the outcast Grishna.[4] The essences of Anzu's ancient sealed rivals were used to create an

[Essence-Infused Moonstone] that could call him to the Sethekk Halls where, still under the control of the Sethekk, he was put down.

Prophecy of the Raven God

"From the darkest night shall rise again the raven, shall take flight in the shadows, shall reveal the nature of its kind. Prepare yourself for its coming, for the faithful shall be elevated to take flight with the raven, the rest be forgotten to walk upon the ground, clipped wings and shame.
Steel your minds and guard your thoughts. The dark wings will cloud and consume the minds of the weak, a flock of thralls whose feet may never leave the ground.
The old blood will flow once again with the coming of the raven, the return of the darkness in the skies. Scarlet night, and the rise of the old.
The raven was struck down once for flying too high, unready. The eons have prepared the Dark Watcher for its ascent, to draw the dark cloak across the horizon."[11]