“The Apexis had every advantage, and yet they vanished. What could have happened?”

The Apexis were an ancient and now-extinct arakkoan civilization that attained a height of power during the Age of Order before abruptly vanishing.[2][3] They were a glorious empire of the sun that ruled vast territories alongside the ogre empire centuries ago.[4]

The Apexis had their own language.[5] They were winged, and unlike the Adherents of Rukhmar that would emerge much later, the Apexis arakkoa did not partake in the barbaric practice of throwing outcasts and heretics into the Sethekk Hollow in order to afflict them with the curse of Sethe.[6]

Long ago, the arakkoa were created by the god Rukhmar atop Gorgrond's highest peak. She taught them about the Light and told them stories of Anzu, who they also worshiped, and from the stories they also began to practice the arcane. She always intended on them returning to Arak, her homeland for which the arakkoa were named, and as she grew old she led them there, three thousand years before the opening of the Dark Portal. But just as they reached Arak, Rukhmar breathed her last breath. Flames consumed her form and she burned like a second sun in the sky. The arakkoa saw Rukhmar's passing as a sign of their ascendancy. They vowed to create a grand civilization that would outshine any other culture on Draenor in order to honor her. The light of their knowledge and their power would blaze in the heavens just as Rukhmar had.[7]

Calling themselves the Apexis, the arakkoa claimed the highest reaches of Arak's spire. They harvested timber from the surrounding woods and metals from the nearby mountains and built illustrious gilded structures around their new home. Using their mastery of the Light, the Apexis crafted enormous lanterns burning with enchanted flames that hung along the length of the spire. Guided by tales of Anzu and his noble sacrifice, arakkoa sorcerers investigated the Sethekk Hollow. By carefully studying the cursed pools, they unraveled the mysteries of shadow magic and developed the unique ability to combine the arcane with the Void. Embracing both Light and Void, the Apexis believed they were both natural parts of life. Two factions formed within the Apexis: the Anhar order studied holy magic, while the Skalax studied shadow and arcane magics. Both groups occupied the upper echelons of arakkoa society, sharing equal prestige and influence.[7] 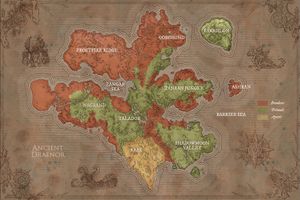 As the arakkoa solidified their power in Arak, they also began to explore the rest of Draenor; though not expansionists, they were curious. Outposts were forged across the land to observe local flora and fauna, and by studying and mapping the forests and mountains they were in awe when they realized that many of these were the remains of ancient creatures that had once walked Draenor. Based on stories from Rukhmar, the Apexis realized the Primals and Breakers were the primordial giants' offspring. They watched the endless warring between the two with pity and fascination. However, they never intervened; they had inherited a touch of Rukhmar's arrogance and to play a part in the lives of land-dwellers was seen as beneath the Apexis.[7]

Two thousand years before the opening of the Dark Portal, the Apexis developed a device called the Breath of Rukhmar that harnessed the sun's energy into incredible destructive power to combat the Primals and the Sporemound Taala when they encroached on Arak.[8]

Centuries after defeating the Evergrowth and 1,200 years before the opening of the Dark Portal, the Apexis had flourished into an empire and their population had swelled. They saw themselves as the most powerful force in the world, that not even the mightiest of Primals had been able to contend with. With nothing to threaten them, the Apexis dedicated themselves to the advancement of science and magic, and knowledge became their culture's most coveted resource. The Anhar and Skalax became the caretakers of wisdom with the duty of cataloging history, the study of magic, and information about the world and its various creatures. Rather than keeping this knowledge in tomes or scrolls, the Anhari and Skalaxi sorcerers combined their magic to develop Apexis crystals. By merely touching one of the crystals, an arakkoa would consume all of the knowledge contained within and even experience the memories of whoever had crafted it.[9]

The Apexis applied their magics to the creation of mechanical constructs that would do their bidding. The arakkoa had always been arrogant, and they had become even more so after their victory. They deemed those who walked the surface to be unclean and used their constructs to mine and gather other resources from the ground.[9]

During the height of Apexis culture, a small group of Anhari priests sought out the remains of Rukhmar. They found her charred bones near the spire, and they used their magics to resurrect her. But it was only a partial success. This new Rukhmar had only a sliver of the original's power and intelligence. Nonetheless, the Apexis worshiped her as their goddess reborn. The Anhari infused her with their Light powers, granting her a long life so she could soar the skies for millennia.[10]

The Anhari priests constructed a gleaming sun temple around the Breath of Rukhmar used centuries before. Hundreds of arakkoa gathered each year to commemorate the Apexis victory and honor Rukhmar. Other arakkoa visited shrines carved into the solid rock near the foot of the spire where the Skalaxi sorcerers performed rituals to honor Anzu and his ancient sacrifice. Though Apexis culture seemed destined to continue its rise, a rivalry developed between the Anhar and Skalax as each vied for the support of the greater populace. The Anhari knew that to seize power they would need to control knowledge. Their leader Priest-Lord Velthreek order his followers to gather as many Apexis crystals as they could, and the Anhari did so in secret over a number of years, storing them in their sun temple atop the spire.[9]

The Skalaxi and their leader, Sorcerer-Lord Salavass eventually uncovered what was happening. They believed that knowledge was a basic right for all arakkoa and Salavass called for the immediate release of the crystals. However, Velthreek ignored the demand. He declared the Anhari the sole rulers of the Apexis and that they would decide who would access the crystals and their knowledge. In addition, he claimed that he and the Anhari were the living representatives of Rukhmar herself. Therefore, following their teachings was the only way to attain her favor. Salavas was cunning and knew what would happen to his order if they did not act: the Skalaxi would become marginalized in society and gradually lose influence. He gathered his followers and struck at the sun temple to take the Apexis crystals by force.[9]

The battle that erupted at the gates to the sun temple quickly spilled into the lower levels of the spire, with some arakkoa allying with the Anhari and others with the Skalaxi. The civil war engulfed the spire for many months, and to turn the tide of the conflict the Anhari harnessed the Breath of Rukhmar. As the weapon ignited and they prepared to incinerate the Skalaxi, Salavass knew they would be doomed against it and led a handful of his most gifted sorcerers to the top of the spire where they stormed through the Anhari guards. As the Ahhari cut down the intruders Salavass weaved a spell to destabilize the Breath of Rukhmar. It worked, but the result was catastrophic: a furious explosion erupted from the Breath of Rukhmar, instantly killing most of the arakkoa on the spire and shattering the land. After the light dimmed, all was dark.[9]

The explosion had split Arak's spire into many smaller spires and the surrounding region was left a barren wasteland. In time, it came to be known as the Spires of Arak. It would take generations for life to bloom in the area again, and even longer for the surviving arakkoa to recover from what had happened. The Apexis society was no more, but from its ashes new cultures would arise.[9] 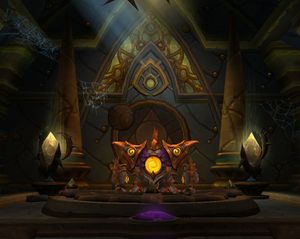 An Apexis guardian within Apexis ruins.

Two hundred years after the fall of the Apexis, a remnant of the Skalaxi led by Yonzi sought to help the ogres rebel against their ogron slavemasters by teaching them in the ways of arcane sorcery. This eventually led to the rise of the ogre Gorian Empire. The arakkoa did this to obtain Apexis ruins under the city of Goria, but the ogre they had taught - Gorgog the Gronnslayer - killed Yonzi slowly and gruesomely. Arakkoa ventures into ogre lands became few and far between, and the ogres began to prize Apexis crystals.[11] The Anhari would continue to dwell in Arak, sharing leadership with a line of kings, and eventually became known as the Adherents of Rukhmar.[12]

In the present, the knowledge of what happened to the Apexis has long since been forgotten, leaving only speculation as to why they suddenly disappeared. Some say that the Apexis Guardians turned against their masters.[13] Their name lives on in the Apexis Crystals and Apexis Shards, which can be found all over Draenor. Apexis Monuments, with four smaller relics surrounding them, are set in a number of places on the plateau. Apexis ruins also seem to surround the Outcast city of Skettis, as well as locations within Arak like the Nest of the Ravenspeakers and Lost Veil Anzu.

The legacy of the Apexis lies preserved in ancient chambers beneath Arak. Legions of dormant constructs; crystals flush with solar energy; magical techniques lost to the ages - the Apexis left behind caches of immense power.[1] Apexis technology consists of machines powered by solar energy — energy which itself has been imbued with magic.[14] The Apexis Cores are the heart of Apexis technology - solar energy condensed into a resin crystal.[15] The Adherents of Rukhmar scour Draenor for artifacts left behind by this ancient society and use their technology in their war against the Arakkoa Outcasts. They claim it is given to them by the will of Rukhmar, but in truth they stumbled upon locations like the Apexis Excavation on accident.[16] Apexis artifacts are capable of enhancing a being's intelligence simply by sheer proximity, as evidenced by the ogres of Ogri'la and the saberon shaman Leorajh.

The Apexis had blueprints for a "Temple in the Sky", but it is unclear if they ever actually built it.[17] This might be the temple they built on the top of the spire of Arak.

The ogres of Ogri'la seek to gain an understanding of the Apexis relics and wish to benefit from the observations of the adventurers who give their aid to Ogri'la.

At the end of the Adherents of Rukhmar's genocidal campaign, both high and cursed arakkoa came to realize that the Apexis had known that having light and darkness in equal measure was natural. Only together could the arakkoa survive whatever the future held for them,[18] leading to the creation of the Order of the Awakened.