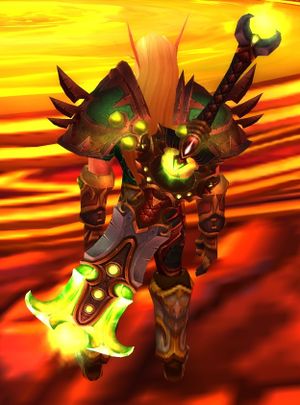 Apolyon, the Soul-Render is an epic two-handed sword. This weapon was the highest DPS melee weapon in the game prior to the release of Wrath of the Lich King, displacing the previous

[Cataclysm's Edge] for this position.

This item drops from Kil'jaeden in Sunwell Plateau.

Its' name is most likely based on Apollyon (Ancient Greek: Ἀπολλύων 'the Destroyer'), which was the Greek translation of the Hebrew term Abbadon. In the Bible, he appears either as a place or an angel related with destruction.