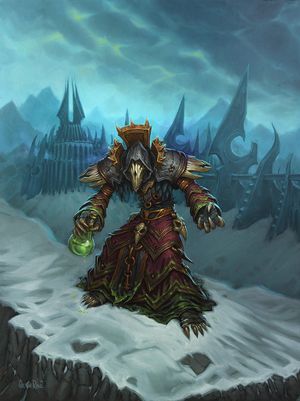 Apothecaries are alchemists of various races but mostly of the Forsaken that also established the Royal Apothecary Society. Other are from the ranks of the pandaren, blood elves, draenei, and nightborne.

The rumors of the medicinal uses of the biletoad were believed to have been started by a particularly mischievous apothecary.[1] The apothecaries were interested in the fungal spores of the Barrens oases.[2] 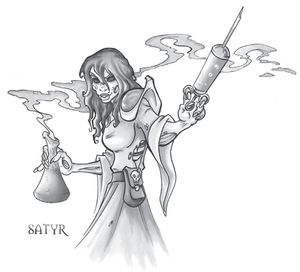 An apothecary is a Forsaken witch doctor. Apothecaries are a new sight on the battlefield, and unique to the Forsaken. Like acolytes, apothecaries are support soldiers, administering potions and alchemical brews to heal and strengthen their allies. The apothecaries are new to their role in war, and rarely takes a place in the front of battle. They are an extremely useful support soldier, however, carrying a variety of potions and alchemical brews with which to reinforce the lines and keep everyone in top shape. If pressed into battle, They imbibe a strengthening elixir and use their enchanted daggers. Their Healing domain is both useful to their living allies as well as their liberated undead brothers, and deadly against the Scourge.[4]

When people think of witch doctors, they usually don’t think of Forsaken. However, Forsaken are some of the most skilled alchemists on Azeroth, and while they don’t entreat voodoo spirits for help and don’t call their craft “mojo,” they still possess tricks to make their brews especially potent. These Forsaken call themselves apothecaries, and the greatest among them enter the ranks of the dark apothecaries.[5]

The iconic apothecary is a withered Forsaken standing in a laboratory. Beakers and cauldrons bubble and spew horrible vapors into the air. Strange, fleshy creatures mew and gurgle within black cages.[5] The undead female smirks with supreme confidence as she uncorks a vial from one of her numerous pouches.[4]