From Wowpedia
(Redirected from Apothecary Lydon)
Jump to: navigation, search

“I yearn to run experiments with... fresh venom... have ordered a collection of small, terribly cute animals on which to test it!”

Master Apothecary Lydon (promoted from Apothecary Lydon with the Cataclysm), is a member of the Royal Apothecary Society. Though dedicated to the Dark Lady and the advancement of the Forsaken, he suffers from severe depression. The only thing that cheers him is the suffering of the living. He had a frog named Umpi whom he referred to as his "assistant" but treated with a lethal callousness. He is likely working closely with Apothecary Jorell at the Go'Shek Farm in the Arathi Highlands.

A former young human alchemist, Lydon participated in a battle during Sylvanas' liberation. The night before attacking the Capital City, Sylvanas met with the freed undead. She spoke about their purpose in the world and asked if they will help her retake the Capital. Lydon asked her what will happen to Garithos and his men. Lydon had already embraced his fate and spoke about humans as being another race. She responded that they will just serve for the battle.[2] 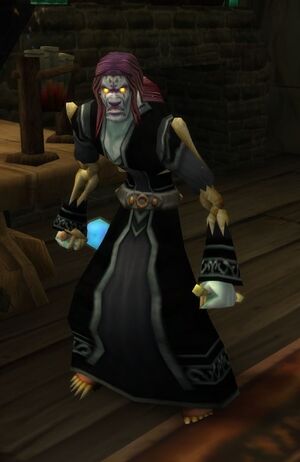 Lydon in Tarren Mill prior to Cataclysm.

Apothecary Lydon was a level 35 quest giver located in Tarren Mill in the contested territory of Hillsbrad Foothills. He helped Apothecary Zamah to create

[Lydon's Toxin] to fix the Horde's problem in Stonetalon. He created the Elixir of Suffering and tested it on his frog Umpi. He sent adventurers to collect

[Mountain Lion Blood] in the goal of creating a death-brew which he used to poison the dog of Hillsbrad, Stanley as a test and for fun. With the help of Master Apothecary Faranell, he created the Elixir of Agony and tested it on some hostage farmers. He participated in the identification of the Venom Bottle. The investigation lead to Shadra, the spider god of troll. After her supposed death, he sent the Shadra's poison to the Undercity.

Lydon oversaw the attack on Gilneas alongside Warchief Garrosh Hellscream during the Dark Lady's absence. Lydon attempted to dissuade the warchief from using the Forsaken people to form a ramp of bodies for the Horde's main advance and proposed to use the new blight instead. This merely served to agitate Garrosh.

Later, as she dreams of the Forsaken's defeat, the Dark Lady observes Lydon's futile attempt to arrange a last defense of the Forsaken at the Bulwark.[2]

After the Cataclysm, Lydon was stationed in the ruined Southshore taking samples. He was later sent to oversee Warden Stillwater's experiments. He was dragged away by Stillwater's guards when he realized the Warden's project was not only a failure, but killing other Forsaken. The apothecary is found and rescued by a hero. Together they coordinate to destroy the failed experiments and execute the insane Stillwater.

Gossip
We are but so close to developing the New Plague that our Dark Lady desires with such fervor.