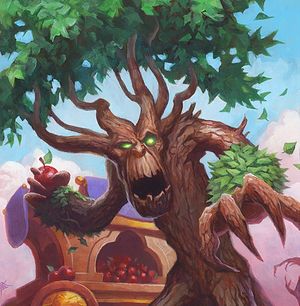 Applebough is a level 75 treant vendor located in Dalaran.

Besides the normal fruits, this vendor also sells

During the purge of Dalaran, he was behind his cart.

On the Broken Isles

Applebough appears as one of the bosses that can be encountered in the Dalaran Heist single-player experience in the Rise of Shadows expansion for Hearthstone.

During the development of Rise of Shadows, Applebough was at one point considered for inclusion as a collectible minion; Team 5 envisioned a design for a "Tree" card which would become dormant upon being killed and could come back to life after the controlling player healed for a certain amount, and initially thought that Applebough would be a perfect identity for this card. However, this idea was dropped since adding Treant synergy to the card could lead to unexpected issues. The design was eventually repurposed for the new character of Lucentbark instead.[1]