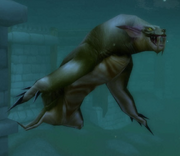 Also known as a sea lion, druids obtain Aquatic Form form from any trainer at level 16. One can only use the Aquatic Form while swimming, but can travel normal running speed in water and will not run out of breath (water breathing). Take note that this 50% increase is of the 66.6% base swim speed, hence giving a 33.3% bonus. Thus, the net effect of this form is to allow you to move at 100% normal running speed in water.

The downside of this form is that it has no defensive capabilities whatsoever, meaning that in a combat situation it's only really useful for escape. Outside of combat however, it has a large number of potential uses. The speed bonus means that it can serve as a fast form of travel if a given destination can be reached via water, and the greater presence of rivers in Alliance territory means it also gives Horde druids venturing into that area with numerous opportunities for concealment, reconnaissance, and rapid escape as mentioned above. The form can also be exceptionally useful for druids with the Herbalism tradeskill, as it allows more rapid harvesting of the herb Stranglekelp, which is valuable on many servers.

Completing the quests is not needed, but does net some easy experience.