Located in the Arathi Highlands, Arathi Basin (pronounced Ah-RATH-ee)[1](AB for short) is a fast and exciting battleground. The Basin itself is known for its rich mines, fertile land and skilled craftsmen[2] and is coveted by both the Horde and the Alliance. The Forsaken Defilers and the League of Arathor have arrived at Arathi Basin to wage war over these natural resources and claim them on behalf of their respective sides. A resource race battleground, players must dominate the Basin's bases in order to claim its resources, similar to "King of the Hill" or "Conquest" modes in other games.

There also exists a "Winter Arathi Basin" version, introduced as a PvP Brawl.

Arathi Basin is a mountain-rimmed valley with some of the most arable acres in the Eastern Kingdoms. The basin has long been a prime point of societal development, offering lumber, gold and prime grazing land for livestock. It was only a matter of time before this fertile place was viewed through the sights of bows and guns.

The Basin's earliest days (and original owners) aren't even footnotes in history – the land frenzy driving Alliance and Horde now dominates the landscape. The League of Arathor, the remnants of the once-proud kingdom of Stromgarde (now occupied by ogres and the criminals of the Syndicate), would claim the basin to profit their allies in Stormwind (and, through them, the whole of the Alliance). Set against them are the forsaken Defilers, free-willed undead who strive to savage the human kingdom of Lordaeron and secure their home in the Undercity – and they demand Arathi's resources to do it.[3]

The Arathi Basin is one of the main staging points of war between the humans and the Forsaken in Azeroth. Arathi Basin is a 15 vs 15 domination battleground, where each side attempts to control the Stables, Blacksmith, Mine, Lumbermill and Farm for as long as possible. The Defilers' elite troopers seek to sever the vital connection between the humans and their dwarven allies to the south. Meanwhile, the League of Arathor seek to reclaim lost lands for their benefactors in Stormwind. 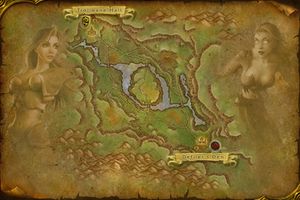 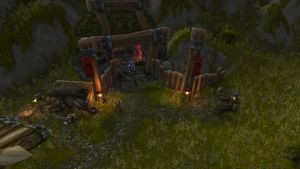 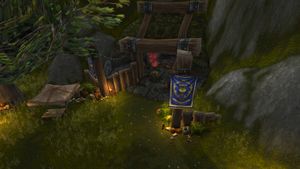 As with all battlegrounds, players of sufficient level can queue for Arathi Basin through the PvP interface.

Players can also queue by speaking to a battlemaster, found in capital cities, or by traveling to their faction's game world entrance to Arathi Basin, found in the Arathi Highlands. The Alliance entrance is located inside Refuge Pointe, while the Horde entrance is located just behind Hammerfall. However, all methods open the same window, offering players the same options. There is, therefore, no practical reason not to simply queue via the PvP interface. 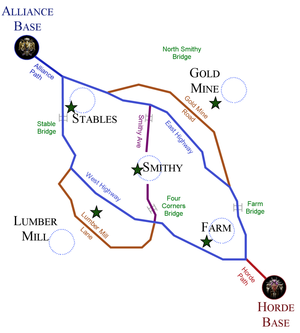 The objective is to be the first team to gain 1,500 resources. This is done by controlling locations on the map ("Resource Nodes"). While a node is controlled, it generates resources for the faction's team that controls it.

Resources accumulate at the rates shown in the table below. 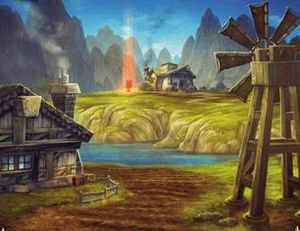 "Controlling vital resource points is the key to victory. Control all five, and you are virtually guaranteed it." — Loraala.

The game awards bonus honor to everyone on your side of the match for reaching certain goals. The amount of honor gained varies according to level. Those goals are:

Losing a match results in less bonus honor, dependent on how many resources your team managed to collect before the loss.

Other scored events do not award bonus honor. These include: killing blows, assaulting a node, capturing a node, and defending a node.

Participating in Arathi Basin improves your reputation with The Defilers (Horde) or The League of Arathor (Alliance).

There are a number of quests involving fighting in Arathi Basin, some of which need reputation with the battleground faction. You can get them from one of the NPCs near the battleground entrances in Hammerfall or Refuge Pointe.

The first quest will usually be The Battle for Arathi Basin!, for which you need to assault four different bases.

Though some of the Arathor and Defiler factions items have different names and artwork, equivalent items' bonuses and equip effects are identical. Highlander's items are Arathor items.

The bulk of the items are belts, boots, and shoulders tailored to various classes. More powerful versions of some items can be purchased as you gain levels, allowing higher level players to receive faction rewards with better equipment bonuses.

See Honor rewards for other items which can be purchased with Honor Points.