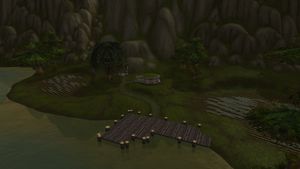 An unnamed dwarven farm is a small domicile and parcel of cultivated land on the southeast coast of the Arathi Highlands. While there, the location is given as The Forbidding Sea. Coordinates are [92, 70] 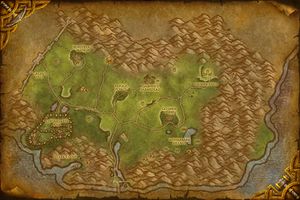 . The area holds two farm fields, a small farmhouse and stables. There is also a dock near the water and ships out in the distance of the sea.

Two Dwarven Farmers live on the farm. One patrols the road leading up to the farm. The other one is inside the house, sleeping. Both are marked as Alliance NPCs. Many critters roam around on the farm. Rats hide in the acre, or in the stable. The cats, which there are many of, only sit and watch the rats. There are two rams in the stable as well.

There are no quests associated with this location, nor are there any named NPCs or even mentions of its existence. It is possible that there was intended to be some form of content present here, though it may also simply be present to add beauty and realism to the zone. In concept, this location is similar to the Silithus coast tauren settlement, though that location was completely abandoned.

Swim south from the Overlook Cliffs, past Revantusk Village, and continue until you see a patch of land. Alternatively, you could swim from Wetlands, starting at the Thandol Span and swim northeast until you reach the farm. As of Cataclysm, one can also fly to the location.