Not to be confused with Arathor. 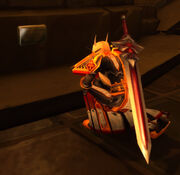 Arator in the Sanctum of Light

Arator Windrunner[1] (pronounced "EH-ruh-tohr"),[2] commonly known as Arator the Redeemer, is the half-elven son of the high elven ranger Alleria Windrunner and the human paladin Turalyon. He became a paladin just like his father and spent much time after becoming independent searching for his missing parents. One of the few known half-elf characters, Arator can be found at Honor Hold in Outland's Hellfire Peninsula.

Arator was only a child when Turalyon and Alleria accompanied Archmage Khadgar beyond the Dark Portal as part of the Alliance Expedition to Draenor. Once, during a frosty winter day, Arator played in the courtyard of Stormwind Keep with a wooden sword, aiming at a frog but hitting a pillar instead. His mother watched him sadly and told him war was not glory.[3] He was apparently well-known by members of the Expedition, including Danath Trollbane, who called him "Little Arator". Turalyon and Alleria, along with the rest of the Expedition, were believed to have died when Khadgar sealed the Dark Portal. With his parents gone, Arator was raised by his aunt Vereesa and uncle Rhonin. Vereesa described him as a blessing in their home and in time, a guide for her own children, Giramar and Galadin.[4]

When his mother Alleria left, Arator was still very young. A few years later, he was present at a ceremony in the Valley of Heroes in Stormwind City, sitting on the shoulders of a Knight of the Silver Hand and looking up at the statue of his mother, a face he couldn't remember. Alleria was observing this from aboard the Xenedar, the vessel of the Army of the Light, and sent her feelings to Arator through the Light. When he received her emotions the young Arator looked around, smiled, and then reached out to her statue. He would return again and again to the Valley of Heroes to see her face, knowing she would always love him.[2]

Eighteen years after the Alliance Expedition left,[1][5] Lord Kazzak reopened the Portal and crossed over into Draenor, now known as Outland. Arator, who has grown up to become a paladin in his father's footsteps, accompanied the Alliance reinforcements from Stormwind and Nethergarde to Honor Hold, where he remains as he searches for his missing parents. Since Danath Trollbane was a family friend, he pledged his sword to Danath and the Sons of Lothar.[6]

Upon the death of Tirion Fordring, he joined the Silver Hand and is located in the Sanctum of Light. He can be seen kneeling before a statue of his father Turalyon.

The Knights of the Silver Hand received a message from Turalyon, now the High Exarch of the Army of the Light, to Arator. He reveals that for him it has been "ages" that he and Alleria have fought the Burning Legion across the stars, and now Turalyon had a message for Arator: the Legion was coming to Azeroth and Balnazzar had been ordered to destroy everything Turalyon held dear. Turalyon told Arator that he must gather the defenders of the Light and fight, or all would be lost.[7]

Arator, Aponi Brightmane, and Delas Moonfang traveled to the Felblaze Ingress in Azsuna to destroy a Legion portal,[8] but were captured and imprisoned on Niskara. They would be freed by the Highlord of the Silver Hand and the High Priest of the Conclave.[9] 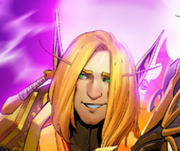 Arator later travels with his aunt Vereesa] aboard the draenei's new dimensional ship, the Vindicaar, to Argus. He reunites with his parents and questions why they did not reach out to their people or to him. His mother responds that every choice they made was to keep him safe, and that it broke their hearts to be apart from him. She vows that, now that they are reunited, she will not let them separate again.[10] He has a conversation with Vereesa regarding the fate of Sylvanas and what Vereesa will tell Alleria, to which Vereesa responds that the thought of the conversation fills her with dread and the truth will break Alleria's heart.[11]

Arator can also be found at Darkfall Ridge where he fights demons seeking to reach the Vindicaar.

After Sargeras is imprisoned by the Pantheon at the Seat of the Pantheon, Arator expresses uncertainty despite his joy of at long last finding his parents. The people who gave him life have been absent for it, and despite their fights to keep him safe they cannot suddenly become a happy family. They know next to nothing about him, and he has only legends of them. Alleria, Turalyon, and Arator have much to learn about one another and many wounds to heal, but at least they will do it together.

Just before the Gathering, Turalyon told Anduin Wrynn that he and Arator were very similar, and that he'd ask his son to come to Stormwind soon.[12]

An alternate version of Arator appears in the Vision of Stormwind. Within the vision, Alleria has fallen to the madness of the void and is orchestrating the downfall of Stormwind from the Cathedral of Light. There, Turalyon is killed by Alleria as the former attempts to reason with her, dying just as adventurers enter into the vision, begging them to save his son. The adventurers are ultimately unsuccessful, as Alleria consumes Arator into a portal of the void before engaging the adventurers and being ultimately defeated; with no resolution to Arator's fate, though this is inconsequential as it is ultimately not real.

I was only an infant when my father was deployed to this wasteland. All that I have ever known of him is what others have told me. Do your dreams change, <name>? Mine do not. I have one dream: A crimson skyline envelops me as Legion, numbering beyond comprehension, battle in the distance. I kneel before the body of a man, presumably my father, and weep. As he is gasping for air, his body wholly crushed, he whispers something. Despite every effort, I am unable to hear what he is trying to tell me.

Force Commander Danath Trollbane says: As I live and breathe! "Little" Arator? Is that you?
Arator the Redeemer says: Aye, Commander; but I am little no more. I have come to find my father. Have you any news to his whereabouts? I know he still lives. I have seen it in my dreams.
Force Commander Danath Trollbane looks at Arator grimly.
Force Commander Danath Trollbane says: I am afraid that I do not, Arator. I have not seen or heard from your father in 15 years. We had long since presumed him dead. But know this: I did all that was in my power to find him. From the bounds of Hellfire to the ravages of Nagrand, we searched... All for naught. If I could give my own life to bring Turalyon back, I would do so a thousand times over. I... I am sorry.
Arator the Redeemer says: As long as he remains unfound, I will search. I know that he lives. And I know that I must find him. I am thankful for what you have done, Commander. As my father called upon you, a brother in arms, know that you may call upon me. I am at your service, my Lord.
Arator the Redeemer says: Farewell, Commander. I will be staying at the inn, should you require my services.

I would gladly lay down my life and fight for the Order of the Silver Hand.[13]