Arcane Intellect is a Mage buff spell that increases the player's Intellect from all sources by 5%. It is learned automatically at level 8. 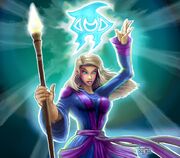 Arcane Intellect in the World of Warcraft Trading Card Game.

Like all buff spells, casting this on a PvP enabled player or an NPC in combat with an opposing-faction player will flag your character for PvP if not already flagged.

Each rank has a minimum level limit for players that can receive the buff. If the target's level is too low to receive the rank cast on him, the highest rank possible will automatically be cast in its place.

According to the RPG, the spell requires a hair or dung sample from a fox to cast.

This spell used to be more expensive, but as of Patch 2.3.0, the mana cost of casting it has been reduced. The relatively long duration of this buff allows you to "stagger" your castings. Cast it on yourself, wait 5 minutes; cast on party member 2, wait 5 minutes; cast on party member 3, etc. With the new lower mana costs, the need to stagger this is greatly reduced, however this technique can be used to reduce the "downtime" associated with buffing the entire party at once.

Higher level mages (level 56+) can also use the spell

[Arcane Brilliance] to cast an equivalent effect on all party members at once. The duration of the Arcane Brilliance spell is 60 minutes, compared to 30 minutes for Arcane Intellect, Arcane Brilliance, however, uses more than twice as much mana and requires a reagent. The extra duration is a great help during long instances.

All classes except warrior, death knight and rogue use mana and therefore benefit from the increased mana pool this buff provides.

Intellect increases the rate at which you learn weapon skills. Should you have a friend who is practicing weapon skills, this will help out.