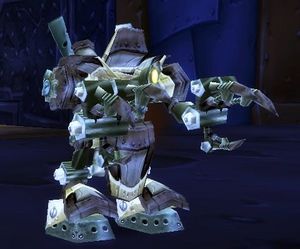 Arcane Nullifier X-21s are level 28 elite arcane nullifiers that can be found in the Gnomeregan instance. They can reflect harmful magical spells.

Arcane Nullifier X-21 appears as a rare card in the Goblins vs Gnomes expansion of Hearthstone. The flavor text reads: "There was some hard talk between gnome magi and engineers about inventing this mech."