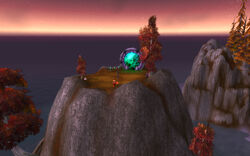 Top of the Arcane Pinnacle

is a mountain peak in Azshara where adventurers may attempt Archmage Xylem's quests in the Trial of Fire, Trial of Frost and Trial of Shadow.

that will put you back up where the initial Image of Archmage Xylem is located.

At the top of the Pinnacle, another Image of Archmage Xylem resides along with a his apprentices and a portal with three stones next to it. Clicking one of the stones tunes the portal to the one of the trials and changes its color and name to "Icy Mortality" (white, ice), "Burning Determination" (red, fire) or "Grim Intention" (purple, shadow). While in one of the Trial areas, the portal to return to the Arcane Pinnacle is named "Waning Sanity" to reflect Xylem's condition. According to reports, as of Patch 4.0.3a Alliance players can tune the portal here to one of the trials but not click the portal to enter. There is no Alliance equivalent of the quests, though the associated achievements are attainable by both factions.

Lobos will regularly disappear as he attempts the Trial of Fire but apparently fails. There are no services here and those who leave will have to find their way back on foot, but Zoey Wizzlespark does sell enchanting supplies.