Arcane golems (or crystal golems)[1] are hulking, magically-powered robotic constructs found mainly in blood elf territories. They act as peacekeepers, defenders, and sometimes public announcers. The golems returned to prominence in Silvermoon some years after Scourge invasion of Quel'Thalas.[2] Their physical build boasts a number of different color schemes depending on the model. The blood elves have put them to the most use, generally using a red-and-gold variant, though also have vermilion and altered fel golem versions in their arsenal. 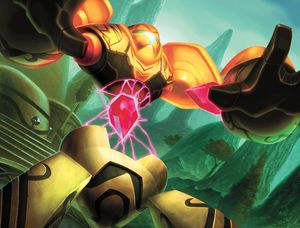 Empowered by the Magisters, the arcane guardians serve the leadership of Quel'Thalas as sentries, peacekeepers, and tools of propaganda. Found mainly in the blood elven capital, Silvermoon City, they patrol it with fervor and serve as the city's elite guard force while supplementing the Silvermoon City Guardians in their duties. They will periodically announce words of encouragement, sing praises to the blood elven regent Lor'themar Theron, urge the people of Silvermoon to remain strong in the wake of Kael'thas Sunstrider's betrayal, and remind the citizens of Quel'Thalas to remain law-abiding.

Aside from those found in Quel'Thalas, other blood elven organizations such as the Scryers have made use of their arcane guardians. Following the formation of the Shattered Sun Offensive, this faction also employed several guardians during the effort to retake the Isle of Quel'Danas from the Burning Legion.

Several blood elven arcane golems have also been modified by the Burning Legion, and imbued with demonic power. These fel golems appear to be a larger and more powerful alternative to the original designs, laced in dark greens and boasting the ability to channel fel power through their systems, in the same vein as a fel reaver. The Sunblade Protector is an example of this design.

Both the Sunreavers and the Kirin Tor have fielded arcane golems in recent times. The former have dispensed familiar-looking models from Silvermoon City, while the latter have created guardians with a violet color scheme. Both forces have also created an alteration of the fel golem model: the Pyrestar Demolisher and the Arcane Destroyer.

They are used by the Tirisgarde, as well as some factions of the Nightfallen and/or Withered. Nightfallen constructs are more crudely built, and often appear lopsided.