Arcanists are a type of mage casters of various races apparently capable of wielding arcane magic including Highborne,[1] humans and even arakkoa[2] and ethereals as well as mogu, pandaren, and draenei.

A rare few of dwarves have been known to dabble in arcane activities and gnomes are remarkably adept arcanists. Pound for pound, they are some of the most potent casters the world has ever known.[3]

Orcs tend to be poor arcanists and few tauren experimented with the arcane.

The Gorian Empire of ogres had arcanists and was known for its powerful ogre-magi.[4][5]

The Silver Covenant have high elf arcanists in their ranks, serving as quartermasters.

In Shattrath, many arcanists can be found in the ranks of the Scryers, and the city of Dalaran was created for and is ruled by magi. 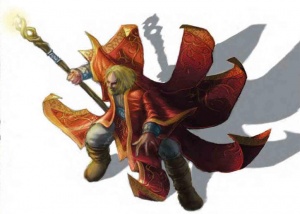 Arcane magic is a volatile and inebriating drug, pure power distilled and channeled through the body to create arcane effects. Many races wield arcane power carelessly, disregarding the lessons of the past. The arcanist class encompasses all users of arcane magic — those who seek power without regard for consequences, and those who think arcane can be handled responsibly; each arcane spellcaster chooses a distinct path. Those who wish to manipulate arcane magic often choose between the way of the mage, necromancer, or warlock. Each path specializes in a particular kind of magic, which reflects the nature and practice of the arcane arts on Azeroth. In a world forged in war and beset by pervasive evils such as the Scourge and the Burning Legion, arcanists have gradually come to excel in specific areas of arcane magic. What Azeroth's arcanists lack in versatility, however, they more than make up for in the abilities they acquire and the powers they wield within their chosen paths.

Dwarves, gnomes, high elves, blood elves, humans, trolls, and Forsaken are all capable of becoming mages. The dark path of the necromancer is rarely taken. Humans and the Forsaken practice this black art, while most other races seem not to have the stomach for such magic. Warlocks are uncommon. Some exist among the Forsaken, outcast gnomes, or humans and orcs foolish enough to toy with the forces of demonic energy. The few remaining high elves who are warlocks have long since become blood elves. Arcanists can have the best of intentions, and while mages mostly tend to be from the good and lawful alignments, necromancers and warlocks tend to come from the more unsavory levels of morality.