Not to be confused with Doan Karhan.

Arcanist Doan was a level 34 human boss located in the Athenaeum section of the Scarlet Monastery Library. He is considered one of the most powerful mages of the Crusade.[1]

He is the keeper of the Monastery's library; a guardian of the arcane that the Scarlet Crusade is rumored to distrust. Yet he is indeed a trusted official of the Crusade, keeping a vital key that grants access to Scarlet operations across the Plaguelands. Arcanist Doan believes that arcane magic is the only way to rid Lordaeron of the Scourge.

Before joining the Scarlet Crusade, he was presumably a member of the Knights of the Silver Hand in much the same position, as he can be seen during the meeting of Commander Mograine, the two paladins Tirion Fordring and Lady Abbendis and the two priests Fairbanks and Isillien in the Old Hillsbrad instance of the Caverns of Time, wearing the same tabard as the other members of Mograine's circle of trusted friends.

As evidenced by the silver coin he has thrown into Dalaran's fountain, Doan has a crush on Abbendis.

He is also mentioned in The Schools of Arcane Magic - Abjuration for his Arcane Bubble spell.

The one thing to watch out for is his Detonation spell he uses when at half-health. This can inflict HUGE amounts of damage to the targets. His Detonation spell can be avoided if you move out of line of sight, so if you tank him near the doorway, you can just move out of line of sight. He will cast it at 50 percent health just after he casts Arcane Bubble.

Doan also uses an AoE silence which can severely limit healers and casters. Due to the relatively small size of his room, the only way for a caster to avoid its large AoE easily is to stay in the corridor, in which case the tank must take care to keep himself and Doan in the casters LOS.

He also Polymorphs a target, so make sure that your priests and paladins dispel it. Druids can shift out of polymorph, Shaman have grounding totem for Polymorph, Paladins can bubble out of it, the polymorph cast can be Counterspelled.

Overall, this encounter is pretty simple. 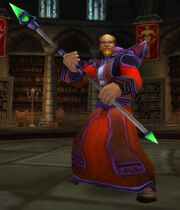 Doan in the Scarlet Monastery

Doan is a popular solo-farming target for Enchanting Rogues and Druids, as there is no stealth-detection on the mobs leading up to him, and he can be engaged without any adds.

He may be related to Felicia Doan, an Undercity trades good vendor.