Archbishop Benedictus is the last boss to appear in the Hour of Twilight.

Archbishop Benedictus is the revered leader of the Church of the Holy Light. For years, his wise guidance has been instrumental in seeing humanity through bleak times. Yet beneath his apparent benevolence lies the shocking truth that Benedictus has pledged himself to the eradication of all life on Azeroth through the agency of his dark master... Deathwing.

Stage One: The Betrayal

Benedictus assaults Thrall with the powers of the Holy Light. 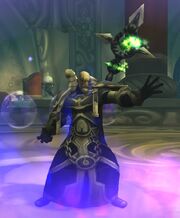 At 60% health Benedictus shows his true form, transforming into an agent of the Twilight and trapping Thrall in a Twilight Prison.

Thrall will assist his allies, helping to combat Archbishop Benedictus.

The keys to victory in this fight are your group's ability to avoid Benedictus' most powerful attacks and your healer's attentiveness in dispelling Righteous/Twilight Shear. During phase one Benedictus will summon three Purifying Light orbs, two of which Thrall will destroy with his chain lightning, leaving only one to avoid. When Benedictus summons the Wave of Virtue, all party members should move to the Water Shell Thrall creates regardless of where the wave is traveling in order to benefit from the bonus damage the shield provides.

At 60% Benedictus will cast Twilight Epiphany, signaling the start of his phase two. All of his ability mechanics remain the same, however Thrall will be unable to assist in weakening them. There will be three Corrupting Twilight orbs that must be dodged or destroyed by a ranged DPS and there will be no shield to hide under for the Wave of Twilight. However, as long as your healer is on top of dispelling Twilight Shear, the fight stays relatively low in damage if players dodge the attacks well.

Aggro
And YOU! We will FEAST on your ashes! Now, DIE!

Wave of Virtue
The light will consume you!

Wave of Twilight
Drown in Shadow!

Death
I looked into the eyes of The Dragon, and despaired...