For lore about archers, see Archer.

Archers use their skill in the crossbow to deal death from a distance. They are slightly more maneuverable than Footmen, but the cost is the lighter armor they must wear. The ability to launch their deadly rain of missiles from a distance makes them a force not to be discounted.[1]

Archers, like all ranged units, are extremely useful in blocking off narrow passages (like bridges) by putting around six of them all in one place so that the oncoming enemy units will be instantly killed, unless said unit is a Catapult or a Spearmen. Their ranged attack makes them much more effective at drawing attention and saving Peasants or important structures. Their only weakness is their low armour, if a melee unit manages to reach the Arhcer, chances are that the Archer has had it.

Wounded archers may be found in the The Dead Mines mission of the Human campaign, and once they are healed by a cleric, they will resume their roles normally. 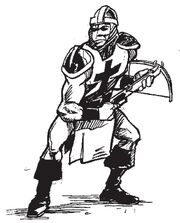 An Archer as seen in the Warcraft: Orcs & Humans Manual.