Archimonde is the final boss in the Battle for Mount Hyjal. The fight is a major battle for survival; even a single player's death can easily result in a wipe.

When any raid member dies, Archimonde gains a Soul Charge which he can use once at a random time (with an animation looking like the Shaman

[Lightning Shield] ability). Depending on which character class created the Soul Charge, the following effects apply to the entire raid on its use:

Single target, only used if no targets are in melee range.

100k shadow damage to everyone in the raid, used 9 minutes after Archimonde is engaged or if he reaches Nordrassil. 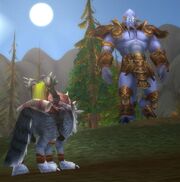 Archimonde in proportion to a player.

Each raid member must acquire a [Tears of the Goddess] from Tyrande Whisperwind in the camp. The tears expire after two hours, so remember to get new ones in time. All raid members should have one (three if possible) Healthstones and a few Super Healing Potions (even healers). Wearing extra Stamina gear is recommended for all raid members (a good idea is to use the High Warlord Naj'entus gear). No other special gear is required, the fire damage in this fight cannot be reduced with resistance. However, Fire Protection potions do help.

Everybody should turn off their vanity meters, and forget about them. Damage and healing done are of no interest - this fight is about individual player survival and nothing else. Think Shade of Aran, but much worse.

There are various approaches to positioning. As everybody needs to move around to avoid the Doomfires, a fixed order is hard to maintain. All players should keep the following in mind:

It's a good idea to give raid icons to decursers and to assign groups to them which stay inside their range. Prior to some patch Doomfire spread out in front of Archimonde only, therefore it was very good to tank him faced towards the mountain, and spread the raid in a semi-circle behind him. This is not true any more, therefore he can be tanked anywhere. The logs in the central area offer some protection from Doomfire, the flames cannot move through them, but still can circle around.

The key to this fight is individual player survival. When learning the encounter, it's a good idea to focus exclusively on raid survival first. Soul Charges must be avoided at all costs, because usage of a Soul Charge usually leads to another player death (and thus to the next Soul Charge).

Raid members must avoid to get Doomfire under all circumstances, avoiding it is more important than anything else. It may be possible to heal through a doomfire. The problem is that healers are very busy getting Feared, Air Bursted and avoiding Doomfires themselves, so there's not a lot of extra healing capacity available beyond keeping the tank up and healing through Air Burst damage.

Therefore all players must keep a safe distance (best is about 20 yards) away from all doomfires. There's no excuse or justification - if doomfire gets anywhere close, everybody must run away. The only exception is the main tank, but it's still very important to leave the trail of fire as fast as possible. The targeting of doomfire is semi-random. It moves straight towards a raid member, but it may randomly change target (there are unverified claims that it likes to target players in the vicinity of its "head"). People should not run in circles, but rather in a straight line away from Archimonde.

This is probably the psychologically most difficult thing to learn in this fight, but remember - if there's a fire on one side of Archimonde, this means that there's no fire somewhere else. Smart players consider it to be a good thing that the fire is on their side, so that they can evade properly and make sure nobody dies, while the lesser members on the other side continue to DPS and heal.

Grip of the Legion

This curse must be dispelled as quickly as possible. Decursers must be spread out well over the raid. One difficult situation occurs when the curse hits a raid member who is running away from doomfire or air bursted (and therefore out of decurse range). All members of the raid should have Purification Potions to remove the curse in this event, though it often fails. A wipe may indeed be inevitable (Archimonde is one of the bosses who is never truly "on farm"), but generally all players on the same side of Archimonde should move as a group.

A frequent cause for wipes in this encounter are raid members feared into Doomfire. The main tank must stance dance to avoid the fear. Shamans should keep their Tremor Totems up. It's highly useful if everyone in the raid has a PvP trinket which they can use when finding themselves running towards a Doomfire while feared. Some guilds actually require their members to obtain the trinket before being allowed to join this fight. Priests should keep Fear Wards up on themselves.

[Mass Dispel] can help too (but is rather mana intensive).

When Druids lack other means to break fear and find themselves running towards a fire, they can drop form. This randomly changes their run direction.

Besides healing through the damage, it's all about using the

[Tears of the Goddess] at the right time. About 30% of the wipes for new raids are caused by players using their Tears not at all or too late. Although they slow fall speed for only two seconds, they must not be used too late. A safe method is to wait until the highest point of the flight path is reached, then wait another three seconds, and then use the tears. This usually results in some falling damage because they expire before touching down, but nobody dies that way. It may be a good idea to do a few practise jumps from a cliff before the pull. Other means to slow falling (like

[Slow Fall]) can be used too. These abilities use the Global Cooldown, while the tears do not. Mages can also use

[Ice Block] when they're near the ground.

At 10% health, the following things happen:

Since reaching Phase 2 is an automatic victory, the only thing the raid has to accomplish is to bring Archimonde down to 10% within 9 minutes. This means the raid has to deal 10% damage per minute, which is 500,000 damage in 60 seconds, or less than 10,000 DPS. Given 15 damage dealers, this means an average of 670 DPS per damage dealer, which is less than half of what players at this gear level should be able to sustain. Therefore, nobody should take any risk. Running away during the whole fight is perfectly ok (because it means that the people on the other side do their job unimpaired) - just don't die.

Intro
All of your efforts have been in vain, for the draining of the World Tree has already begun. Soon the heart of your world will beat no more.

Aggro
Your resistance is insignificant!

Hand of Death
At last it is here. Mourn and lament the passing of all you have ever known and all that would have been! Akmin-kurai!

10% Health
Tyrande Whisperwind yells: The trap has sprung! The Horn has sounded! Archimonde will meet his end today! Rejoice!
Archimonde yells: No, it cannot be! Nooo!