"I won't pretend that I don't wish you'd choose a more... typical line of work. But no matter what, you are my daughter, and I'll never forget that."

Archmage Ansirem Runeweaver is a member of the Council of Six, the leaders of the Kirin Tor of Dalaran. 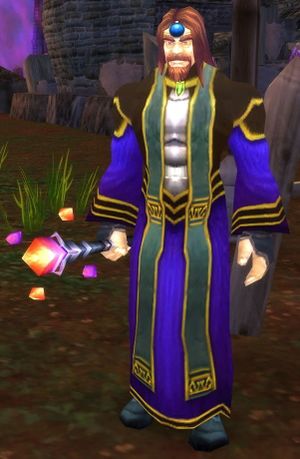 When Ansirem was a student, he was not the top of his class. He created an enchanted gem to aid him in casting spells, but it only worked half the time. He intended to use it to help him cheat during his exams, but he failed them anyway. After learning that cheaters never prosper, he learned his magecraft the hard way.[1]

Ansirem has a daughter named Catelyn. Rejecting the "boring life" of a mage, she decided to become a pirate and joined the Blackwater Raiders. Ansirem still cares for his daughter, and has a few "friends" he keeps plied with gold in Booty Bay who keep him updated when things happen there.[1]

By the time of the Third War, Ansirem was a member of The Six. Grand Magister Rommath still holds Ansirem (and Modera) in contempt for doing nothing when Grand Marshal Garithos locked Prince Kael'thas and his followers away in the Dungeons of Dalaran.[2]

World of Warcraft and the Cataclysm aftermath

Archmage Ansirem Runeweaver was a level 40 quest giver located at Dalaran Crater in the contested territory of the Alterac Mountains. At some point, he at least worked with Baron Revilgaz.[3] He once visited Stranglethorn and found a troll relic, a blade, and later gave it to Catelyn who ran with it off.

Ansirem Runeweaver remained at the site of the crater left behind by Dalaran's literally earth-shaking exit until the Cataclysm of the world. Despite his disappearing he still served the Kirin Tor and was, in fact, a member of The Six.[4]

Ansirem, Modera, and a few other magi arrived near Booty Bay to save his daughter Catelyn when she and her crew were under attack from the Bloodsail Buccaneers. He gave her his cheating gem (having to admit where it came from as the other magi knew about it) to pay off a debt to the Steamwheedle Cartel, although he advised her to leave out the part of its unreliability when she sells it.[1]

Ansirem was present during the meetings of the Council of Six and Jaina Proudmoore who was asking for help in defending Theramore and attacking Orgrimmar.[4] 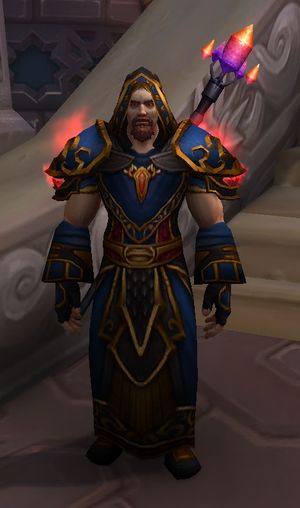 When Khadgar called for a vote to have the Horde return to Dalaran, Ansirem was the only member of the Council of Six besides Jaina who voted no. They were outvoted and Jaina left, leaving Khadgar to take over.[5]

Aethas Sunreaver sought to return to Dalaran after being expelled in the Purge of Dalaran, and used the retrieval of

[Felo'melorn] to help convince the council. Khadgar had the Council of Six take a vote. While Ansirem expressed doubt that Aethas wouldn't just betray them again, Karlain brought up that if Aethas had any ulterior motives he would have simply given Felo'melorn to one of his Sunreavers. Convinced by Karlain's words, Ansirem changed his vote to accepting Aethas back into the Kirin Tor, although not as a member of the Six.[6]

Ansirem Runeweaver was at the time of Lands of Conflict a leading member of the Kirin Tor, and was the ruler of Dalaran.[7] He lead a conclave of fellow wizards in their vigil of the (former) dome. He constantly moved about the dome’s periphery. He was a nice enough person, but said very little of what went on beneath the dome.[8] Dressed in an elaborate violet robe, the bearded man stood with his eyes closed and his brow furrowed in concentration. He was quite tall, and, although he appeared fairly old, he stood perfectly still — reflecting a great deal of physical discipline. The man carried no obvious weaponry, but his arms were crossed in his robes, concealing both hands.

Ansirem Runeweaver was no stranger to combat, having helped defend the magical city of Dalaran for the better part of four decades. He was confident, but not cocky, and always seemed to know where best to strike for maximum effect. Upon engaging in combat, Ansirem’s first action was usually to summon additional help, immediately following with a series of offensive blasts directed at enemy spellcasters. He targeted arcane spellcasters first, then any healers or archers. If Ansirem appeared to be winning after the first few exchanges of a combat, he pressed the advantage with area-effect spells such as rain of fire or shockwave. If he thought he is losing, however, Ansirem would not hesitate to cast teleport and beat a hasty retreat back to his private sanctum in Dalaran.[9]

He is also the author of various books which can be found in Dalaran: