This article is about the boss of Shadowfang Keep. For character biography, see Archmage Arugal. For the character's appearance in Grizzly Hills, see Shade of Arugal. 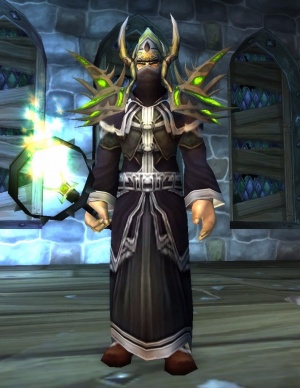 Archmage Arugal is a former mage of Dalaran and the final boss of Shadowfang Keep.

Arugal is without a doubt the most difficult of the low level bosses. Although since the changes in patch 2.3.0, he is fairly easy to defeat by a good group. Unlike the bosses of Wailing Caverns or the Deadmines he is more than simply tank and spank/CC. Arugal has three abilities: Void Bolt, Teleport, and a werewolf control ability that transforms one of your party into a Worgen — which will then attack the rest of the party. The Void Bolts are very powerful, dealing up to 255 damage. Arugal is extremely capable of three and four-shotting party members. A tank or member with high health are the only ones who will be able to survive continuous aggro, and he will need large amounts of healing and perhaps shielding.

Arugal's room is divided: You enter it on top of a raised platform out of his aggro range. This platform goes around the right side of the room. The room is sunken down to the floor below you, where there are three Sons of Arugal. You will need to pull these. On a small raised platform across from where you enter is Arugal. At several points throughout the fight, Arugal teleports to the other raised platform. It is a good idea to not chase him, as he will teleport back in a few seconds, and melee can quickly pick up DPS when he returns. Ranged DPS should continue attacking and your healer should keep up the healing until he teleports back. A valid tactic, if you have a Priest or Warlock who is capable of doing so, is to use

[Drain Mana] on him. If you can get rid of Arugal's mana he can no longer cast Void Bolts, and his threat to the party (provided your tank is still alive) is almost eliminated. Warriors with

[Feral Charge] and other classes with interruption abilities should try to stop his casting as much as possible.

The other danger is the Worgen transform ability. Arugal will shout "Release your rage!" when casting this. Whoever is transformed will begin attacking the party - they should be Polymorphed or feared, the worgen spell only lasts for 10 seconds. There is also the chance that the transformed party member will heal Arugal. The fight is about being able to keep the party alive long enough to kill him and keeping the werewolfed person under control - Arugal has far, far more mana than your healers at this level and when your priest can no longer heal, he will still be able to use Void Bolt. Keep a few healing or mana potions as you should for any final boss of an instance.

Though the 2.3.0 nerf has made him significantly easier, it is a hard fight if your group doesn't have high dps. Without high dps, you won't kill Arugal fast enough to avoid his more deadly attacks, resulting in quite a difficult battle.

Fenrus the Devourer dies
Who dares interfere with the Sons of Arugal?

Aggro
You, too, shall serve!

Transforms player into a worgen
Release your rage!

Killing a player
Another falls!