Archmage Xylem was a level 60 quest giver located at his tower in Azshara, however, he has since disappeared from there and created several images of himself to help train his dozens of apprentices. There are three achievements -

[Glutton for Icy Punishment], and

[Glutton for Shadowy Punishment] - related to its quests.

He is a powerful archmage who was long ago attacked by the green drake, Morphaz, who devoured one of his apprentices whole and as such consumed an arcane shard of enormous power. The vengeful archmage has sworn to hunt and kill the drake and recover the shard from his stomach.

Archmage Xylem lives in his tower in the mountains of northern Azshara. To be able to get to the tower and to Archmage Xylem, you need to speak with Sanath Lim-yo[28.1, 50.1]

and do the repeatable quest

[55] Meeting with the Master to be teleported up the cliff.

He is described by Jediga as being very dangerous, and acting odd compared to other humans. When the player returns without any problems she says she would've expected the mage to be at least reluctant.

[17] Azshara Blues. Xylem also appears as a possible guardian during

During the Cataclysm beta Blizzard stated that: Archmage Xylem is still in his tower in Azshara, but seems to have stumbled upon something that has quickly driven him insane.[1] It's later revealed in the updated Hallow's End that Xylem is insane and has been collecting artifacts. He tries to acquire some more artifacts but his servant loses them to a hero.[2]

Ever since Xylem found an ancient grimoire at the Legash Encampment he has become "unstable" and locked himself away in his tower, while his apprentices have gone to ruins across Azshara to find artifacts to impress him. Xylem steals the Focusing Iris from the vaults of Dalaran to become the most powerful mage of all time, and after a letter proclaiming his intentions is found on the corpse of a Burning Legion agent at the Broken Shore, he is confronted by an adventurer sent by Kalecgos on behalf of the Council of Six. Xylem escapes with the Focusing Iris via a portal and orders Sanath Lim-yo to hold off the adventurer, but Sanath comes to his senses after the fight and explains that the grimoire has eroded Xylem's mind. Joanna works to find a way to reach Xylem wherever he went and alerts the Kirin Tor while the adventurer returns to Dalaran.[3][4][5]

Xylem fled to the Eye of Eternity, where he could use the Focusing Iris to wreak untold havoc on Azeroth's ley lines and siphon their energy directly into himself. Drained of magic, Azeroth would be ripe for destruction by his demon masters and his power would become limitless. Joanna asked that an end be put to his madness, but requested that his life be spared if possible. During the fight, Xylem came to his senses and attempted to focus the power back through the iris, and as a result the Corrupting Shadows emerged, telling Xylem that he could not defy the will of the Legion. With the Corrupting Shadows' defeat Xylem finished his spell and thanked the hero for sparing his life. The Focusing Iris's energy was returned and the ley lines restored, and Xylem returned the iris to the Kirin Tor with his apologies.[6][7] 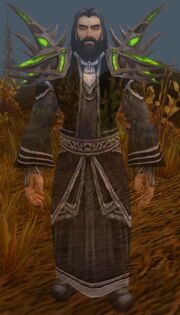