“A strange vision haunts me... I see a continuous cloud of smoke ascending toward the sky, left in the wake of a giant fire moving ever faster away. It is not a natural phenomenon, nor a creation of evil; that much I know. I have no knowledge of what it looks like, save that it is the product of the labor of many. Yet, without more hands, it may never come to be.”

Area 52 is a neutral goblin-run town found on the southwesternmost island of Netherstorm. It is a settlement structured much like Gadgetzan and Everlook, with a short wall surrounding a small hovel of buildings. The goblins are seen building a rocket ship, named the X-52 Nether-Rocket, to journey into the Twisting Nether.

Area 52 provided bombs to the troops fighting the Burning Legion in Hellfire Peninsula.[1][2] 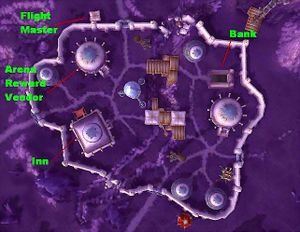 Anchorite Karja says: With all due respect, A'dal sent us here to investigate Kael's activities, not mount a full-scaled attack.
Spymaster Thalodien says: Look, sweetheart. No one's talking about storming Tempest Keep ourselves, but when we see a target of opportunity we have to take it.
Exarch Orelis says: Hold your tongue, Knave! Do not dare use that tone with a priestess of the Light!
Magistrix Larynna says: [Thalassian] DOr shar'adore da shando (Translation: I'm surrounded by idiots!)
Anchorite Karja says: The magistrix will be happy to know I'm fluent in Thalassian. Your courtesy is not lost on me.
Anchorite Karja says: Back to the topic... we should focus our attention on these manaforges. We need to learn what the enemy is doing with them and why.
Magistrix Larynna says: We've told you all there is to know! Do you forget that many of us used to be trusted followers of Kael'thas?
Spymaster Thalodien says: ...and just look at where that got us!
Exarch Orelis says: Even you must admit that your information from defectors is outdated and unreliable. Let us make calculated attacks on these manaforges and gather what information we can.
Spymaster Thalodien says: Finally, some talk of action from the big guy!

Periodically, the Experimental Pilot will start a conversation with an Engineering Crewmember.

Area 52 has a number of references to the outside world in it, primarily in relation to aliens and space: