Arena Point refers to points awarded by participating in Arena PvP System competitions with your Arena team. It was used to buy Arena Rewards, but have been replaced by

[Conquest Points] as of Cataclysm.

While you can be on one team of each type, at the end of each week you'll only gain points from the team that earned the most points that week. However, note that given equal rating, 5v5 teams earn more points per week than 3v3 (88%), which earn more than 2v2 (76%).

To clarify with an example:

Results at the end of the week:

Note: in the example we provided above the 1500 refers to the team's rating. The number of points an active player gets from a team is derived from the rating value plotted on a logistic curve. 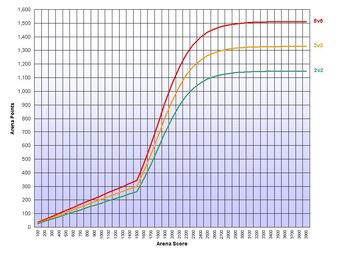 "The transformation from your Team Rating to Arena Points starts off as a linear function, but once you go beyond a certain rating threshold, the function becomes logarithmic. This means that you will see a significant payoff increase once your Team Rating goes beyond a certain point, but the high-end spectrum of the ratings will eventually notice a decrease in how much bang they get for their buck."[1] You can stockpile a maximum of 10,000 Arena Points.

Blizzard doesn't want to "split" points among active players, as that would encourage you to not have alternates on the team, and they don't want to pressure you to minmax the system by always having the min number of players for a team.

Bear in mind that the arena point return for your team's rating isn't linear.

That being said, Blizzard is deliberately trying to encourage the most competitive players to participate in the 5v5 battles, as they feel considerably more comfortable with the potential class balance in this environment. 2v2 has far more potential for certain class combinations to be heavily favored, and as such Blizzard is being conservative about how strongly they reward the smaller format sizes.

Your team only needs to fight 10 battles per week to be eligible for points. You can fight more if you so choose. However, due to the way the rating system works (and the way points are derived from rating), teams with high ratings are (in theory) increasingly likely to play only the minimum required number of battles.

On 26 September 2007, the formulae used to calculate Arena Points were changed, as outlined on the official site about WoW arenas. [1]

Arena point reset in Wrath of the Lich King

On November 19th, Wryxian (of the official EU forums) announced that arena points for players will be reset at level 71 and they will be removed from level 70 arena teams, "Players who level past 70 will have their Arena points reset to 0 and be removed from all Arena teams in the level-70 bracket."[2][3]