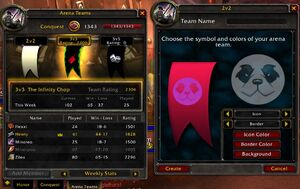 Prior to Patch 5.4.0, players wishing to compete in arena combat were required to create or join an arena team. Teams could either be 2v2, 3v3 or 5v5 and could not comprise more than double the amount of players required for one fight (i.e. a 2v2 team could have no more than four people in it). Players could only join one team of each type. Each team had its own name, and its own crest creating using a built-in design tool.

Patch 5.4.0 removed arena teams, allowing any players in a party of the appropriate size to queue for arena matches without formally creating a team. Team rating consequently ceased to exist, along with team names and crests.

To create an arena team, go to your Player vs. Player tab, default hotkey (H), click the Arena Teams tab and select the appropriate team that you wish to create. After selecting a name and tabard you can create the team and invite other players into it.

To join an arena battle, invite the number of players required to a party and click "join battle" from the conquest tab. The party must consist of either 2, 3 or 5 players (2 for a 2v2 team and so on), and all the players in the party have to be members of the same arena team. Once the "join battle" button is click, the team members will be placed in the arena queue.

Each team has a team rating that increases or decreases when you win or lose an arena match. This rating reflects how well your team is doing in the arenas; the higher your rating, the better, and determines your placement in the region (i.e. US or EU) and battlegroup ladders. The rating does not make any difference in which enemy team you will be fighting, and neither does it make a difference in the amount of rating you or your opponent lose/win. That's all based on the matchmaking rating.

When you create a new team, the team rating is set to 0.

Matchmaking Rating (MMR) is a secondary team rating that is used to team players up against others at about the same skill level. It changes every time you play an arena battle and can only be seen at the end of the fight. MMR increases and decreases just like the actual team rating, i.e. if you have 1600 MMR, you will almost always fight against other teams with around 1600 MMR.

A new arena team starts at 1500 MMR, and 0 rating. This means that you might actually end up fighting against a team with a rating of 1500 points higher than yours, but with the same MMR. If you win the match, your rating will go up with an amount fixed towards the opponent’s MMR, and not based on their actual rating.

Each character also has its own personal rating(s). A separate personal rating exists for each type of arena team (2v2, 3v3 and 5v5) as well as for rated battlegrounds. Personal ratings are only affected by your own accomplishments (others can battle, using one of your arena teams and changing its rating, while not affecting your personal rating).

Personal rating is used to increase the maximum amount of

[Conquest Points] you may obtain the following week, and to let you buy even more powerful PvP rewards. The cap (for arenas) starts at 1350, but as soon as your personal rating exceeds 1500, the cap will gradually increase. This cap can be calculated if you go to the bottom of your character's armory profile and press "More PvP information", then click the "Conquest Point Calculator" in the top right.

If you have a 3v3 or 5v5 personal rating of 2200 or more you will start being able to buy the elite equipment of the current season.