For the encounter in the Trial of the Champion, see Argent Confessor Paletress (tactics).

"In the face of despair and hatred, we must continue to stand true to our beliefs and fight on."[1]

Argent Confessor Paletress is a human priestess who can be found in the Argent Pavilion at the western portion of the Argent Tournament Grounds. 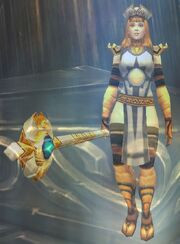 An image of Paletress in Utgarde Pinnacle.

Paletress will periodically give a speech to each praying faction Champions. After this, behind the confession screen, she receives the confessions of some of the Champions present in the room.

When the Twin Val'kyr Fjola Lightbane and Eydis Darkbane led an attack of Vengeful Val'kyr on the tournament grounds, Paletress confronts and defeats them. Shackled by Priestess Alorah and Priest Grimmin, their capture was an unexpected opportunity for the Crusade, and they were later sent into the Trial of the Crusader.

Paletress also features as an encounter in the Trial of the Champion, where she seeks to help adventurers overcome their fears through forcing them to defeat the memories of some of their greatest adversaries. She is later one of the NPCs that have a chance to assist the player in

[85 Daily] The Protectors of Hyjal. In patch 4.3, her image is in Utgarde Pinnacle to provide the quest to kill Svala Sorrowgrave.

During the Scourge resurgence, Paletress revealed that the Scourge had overrun the chapel and forced the Crusaders there to flee. She was then seen defending the grounds in front of the chapel.

Herald Beluus yells: The Val'kyr are attacking! Take cover!
Vengeful Val'kyr yells: Fools! Did you think our master blind? Did you think we did not know of this intrusion? Our elder sisters come, and there will be no escape from their wrath!
Fjola Lightbane and Eydis Darkbane fly to the gates of the coliseum. Paletress spawns in front of the gates and walks out to them.
Argent Confessor Paletress says: In coming here, you have made a grave mistake. These tournament grounds are a bastion of the Light, and you power cannot match it.
Argent Confessor Paletress says: I am sorry, but you do not belong here, and you cannot be allowed to harm the innocents on the grounds.
The twins attack with Touch of the Val'kyr, but Paletress charges up Holy Smite and blasts them both, stunning them. Priest Grimmin and Priestess Alorah spawn, casting Shackle Undead on Lightbane and Darkbane respectively and pull them to the ground.
Fjola Lightbane says: This cannot be!
Eydis Darkbane says: This cannot be!
Argent Confessor Paletress says: Once more I apologize, but you chose this fate. 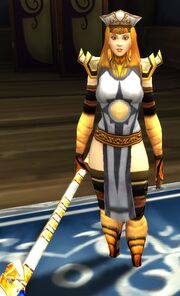 Thank you all for attending this sermon. It's wonderful to see so many familiar faces!
Today I would like to touch on the three virtues of the Light.
These are dark and difficult times for us all. The armies of the Scourge amass to the south. Companions fall on the battlefield and rise to serve our enemy moments later.
Many of you have experienced a betrayal of trust.
Yet you persevere, as we all must. In these times, no one is a stranger to the virtue of tenacity. In the face of despair and hatred, we continue to stand true to our beliefs and fight on.
There can be no doubt as to your tenacity... but there are other virtues to consider.
Respect is the first virtue taught to those joining the path of the Light.
Look across the aisle to those you would call enemy. Despite the hatred that separates you, there are qualities to respect in your opponent. Their prowess should be acknowledged.
All of us gathered here have a concept of honorable combat. Conducting yourself with honor and treating your opponent as you wish to be treated shows respect.
Respect your opponent on the field, whether he be your brother or your sworn enemy. No matter where your beliefs truly lie, such respect is acknowledging a connection...
...and in acknowledging those connections, you are closer to the Light.
There is one further step on the path of Light: compassion.
Rivalries abound in this day and age. It is easy to see differences wherever you turn.
The challenge is in looking beyond appearances and understanding our similarities. Through this understanding, you can feel compassion for the losses others have suffered...
...even if the victim bears another banner.
By feeling and understanding compassion in enemy and ally alike, you reaffirm your connection with the world.
Acting on these tenets, these virtues, help make the world a place we all can appreciate. A world of honor and justice.
Think on my words, friends. In the darkness that surrounds us all, the Light is needed more than ever.
I'll be behind the confessional screen if anyone wishes to speak with me. Any doubts, any worries, any uncertainties I will happily soothe.

Trial of the Champion

As an ally on Mount Hyjal

Darkness has fallen upon these grounds.

The Scourge appeared without warning.

If it were not for our allies, more would have been lost.

I thank the Light we managed to escape.