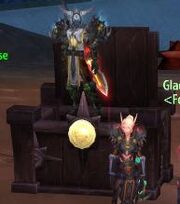 The Argent Crusade Tribute Chest was an object that spawned when Anub'arak was defeated in Crusaders' Coliseum on heroic mode. The items contained depends on the number of attempts left.

[Crusader's White Warhorse] (Alliance) and the

[A Tribute to Immortality].