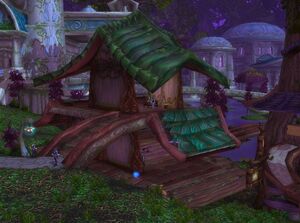 The Argent Dawn embassy[1] is an unnamed building in the Craftsmen's Terrace of the night elven capital of Darnassus. The embassy is maintained by the Argent Dawn, a holy order dedicated to combating evil forces. The building's first floor serves as an alchemy shop, while the second floor hosts the embassy proper.

[The Purifier's Prayer Book] would notably be delivered to the embassy after being retrieved from the bodies of their owners, Feero Ironhand and Delgren the Purifier.[1]

The Argent Dawn seeks to liberate locations that have been taken by evil forces. Because of that, they move from place to place, but by necessity they have a few stable headquarters, both on major cities such as Darnassus and at more humble locations, such as Chillwind Camp.[2] While the Argent Dawn is a neutral organization, some of its founding members were once Knights of the Silver Hand, as such they still hold some level of influence within the Alliance, who honors them with their own headquarters in Darnassus, and a few buildings in other cities.[3]