Argent Officer Pureheart is a human quest giver located at Chillwind Camp in the contested territory of the Western Plaguelands. 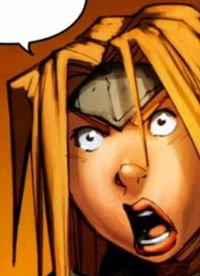 Pureheart was present when the death of Alexandros was revealed. She and Maxwell Tyrosus left their comrades and established the Argent Dawn. She participated in the battle against the Scourge led by Kel'Thuzad in the field of the Light's Hope Chapel. She was astonished as she watched Darion's sacrifice.

She became the leader of Chillwind Camp and sent Gregor Greystone to recruit other members, including the Steamwheedle Cartel.[1]

During the time of invasion of Outland, she reunited with Thorn, an old friend, and joined forces with Maddox to retake Andorhal, they expected hundreds of soldiers but received just a one hundred of them.[2]

Pureheart was completely against invading Andorhal with such a small force, but was convinced by Maddox saying that Halsand knew very well the region and they would defeat the Scourge with a good tactic. The army was divided in two, while it's not shown what happened to Pureheart's part of the army, it is speculated by Arif that they were killed by various abominations.[2] It is likely that Pureheart herself did not battle in Andorhal.

She is still alive and well after the Cataclysm, and is now a member of the merged Argent Crusade.

She starts the following quests:

Prior to the Cataclysm, she offered the following quests:

Well met, friend. I am Officer Purehearrt, and I am a proud member of a world-wide organization known as the Argent Dawn. Our cause is simple - fight swiftly and mercilessly against any element of evil that surfaces in Azeroth. We are not a political body, nor do we ever wish to become one. To that end we call both the Alliance and the Horde both as friends - friends in the cause of stamping out evil!

For the Dawn, my brother!