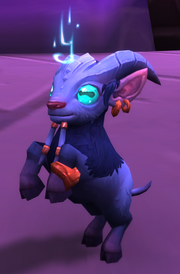 Argi is a companion that resembles a mix between a draenei and a goat. She[1] bears a Gift of the Naaru upon her forehead.

Argi is also included in a bundle alongside

Often caught chewing on things they shouldn't be, goats were initially blamed for the crash of the Exodar.

A gleeful little goat that's out of this world.

Inter-goat-lactic - If you're looking for a companion to jump into your heart and nibble your socks, this little interstellar traveler would love somewhere to call home. She'll light the way with her Naaru-touched horns, climbing, swimming, and running wherever you go. Adopt this rambunctious little ruminant today!