This article is about the homeworld of the eredar. For the titan world-soul of the same name, see Argus (titan). For the boss encounter, see Argus the Unmaker. For other uses and appearances, see Argus (disambiguation).

Argus is the original homeworld of the eredar, now located within the Twisting Nether.[1] It was once described as a utopian world whose inhabitants were both vastly intelligent and highly gifted in magic. It has since been twisted by demonic, chaotic energies and became the stronghold and homeworld of the Burning Legion.[2][3]

Argus is a no-fly zone, similar to the Isle of Thunder. It is navigated with the Vindicaar's console. It features two instances, the Seat of the Triumvirate dungeon and the Antorus, the Burning Throne raid.

Argus falls to the Legion

Like Azeroth, Argus contains the world-soul of a dormant titan.[4] The planet was abundant with a mineral called argunite, the magical properties of which helped the eredar civilization thrive.[5]

Argus was once ruled by the Second Duumvirate, consisting of Velen and Kil'jaeden. During this time, the sorcerer Thal'kiel and his order of eredar mages, the Wakeners, began using summoning magics to conjure demons from the Twisting Nether. Velen condemned Thal'kiel's new summonings and ordered him never to conjure them again. However, with the support of these entities, Thal'kiel hoped to become the sole ruler of Argus. His trusted apprentice, Archimonde, informed Velen and Kil'jaeden of the planned coup. Archimonde was placed in charge of the attack on the Wakeners' hidden stronghold and decapitated his former master himself.[6] Archimonde would later rise to rule Argus alongside Velen and Kil'jaeden, and the three eredar wisely ruled the planet for many years. Mac'Aree was the most sacred of the cities on Argus.[7] 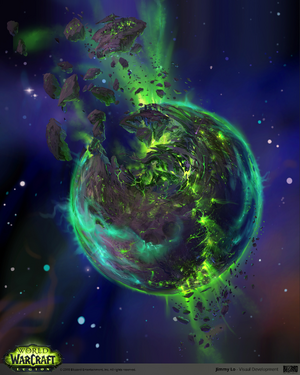 Artwork of Argus shown at BlizzCon 2016

Eventually, Argus attracted the attention of Sargeras. He offered the eredar a deal: in exchange for their loyalty, he would give them power undreamed of by all races. Kil'jaeden and Archimonde were quick to accept the offer, but Velen had a vision of the future: the eredar would be transformed into demons under the rule of Sargeras. His advice to Kil'jaeden and Archimonde went unheeded, and he desperately sought a solution to this dilemma. Lord Nath'raxas played a role in delivering Argus to Sargeras.[8] 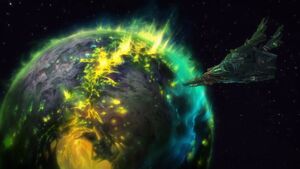 Argus as seen in the Patch 7.2 cinematic

Eventually, Velen was contacted by a race of divine energy beings called the naaru, and he fled with his followers, renaming his people the draenei, or "exiled ones", while Kil'jaeden, Archimonde and the rest of the eredar became the feared, insidious sorcerers and tacticians of the Burning Legion. As the draenei fled, the world was devoured by the Legion.[9] After Argus fell, Sargeras ordered a temple of darkness to be built deep within the planet's core. Little is known of it, for only the titan's most devoted acolytes are given sigils that permit entrance.[10] This might be the titanic structures that Alleria Windrunner and Turalyon buried deep within a canyon.[1]

Following the death of Goremaw the Devourer, Sargeras' personal hound, the dreadlord Mephistroth believed that Goremaw could still serve the Legion. He extracted the felhound's fangs and took them to a great demon forge on the eredar homeworld of Argus. There were many challenges in preserving the fangs' dark energies. Mephistroth dared not handle the task himself. His subordinates were eager to distinguish themselves, even at great risk. But the fangs' twisted power often proved too dangerous. When it pierced their minds and inflicted unspeakable agony, the dreadlord simply discarded them, giving their souls to the demon forge and finding another servant to take their place. But in the end, their work was successful. The fangs had been sharpened to a permanent edge, their shadow powers preserved for all time. Mephistroth had created the Fangs of the Devourer, two of the deadliest weapons the universe had ever known. He presented the daggers to Sargeras, who was greatly pleased. Goremaw had been a terror on the battlefield; in the hands of a skilled assassin, its fangs would be a terror in the shadows.

Later, Sargeras found an eredar tracker named Akaari who has proven to be worthy to wield the fangs. She was summoned to Argus and was promised to become a fearsome instrument of death, one of the deadliest creatures alive in any known realm. Akaari would need to give up her will, but she accepted. Afterward, Akaari spent centuries in secret chambers beneath the surface of Argus, where weapons were forged and wills were broken. Her essence was shaped and molded as well, intertwined with the daggers' power. The souls of other eredar assassins were sacrificed and bound to hers, granting her the experience of a hundred lifetimes and thousands of kills. When she emerged from those chambers, she did so as a remorseless construct of death, perfectly obedient to Sargeras.[11]

Argus appearing in the skies of Azeroth, as seen from Dalaran

Argus has since become the stronghold of the Burning Legion, where Azzakel waits for an opportunity to invade other worlds.[2] A portal was open from Argus to Auchindoun but was quickly closed by the planet's defenders.[12]

It was also revealed that the eredar had rewritten Argus' history books to paint Velen as a traitor.[13]

Following the Battle for the Exodar, Velen ordered the Light's Chosen to make the necessary preparations for their new vessel, the Vindicaar, to return to Argus.[14]

After defeating Kil'jaeden in the Tomb of Sargeras, Illidan Stormrage uses the

[Sargerite Keystone] to open a rift between Argus and Azeroth, making Argus visible in Azeroth's sky. This made many of Dalaran's citizens worried, especially as doomsayers started to spread panic.

As Kil'jaeden died in an explosion aboard his ship near Argus, the ship crashed into the world, uncovering a cave network rich with minerals in Krokuun.[15]

Please add any available information to this section.
As the Legion's homeworld, Argus is hostile territory. Demons patrol every crag of Argus's shattered surface, and sometimes it seems as if the planet itself is out to get you.[16]

At some point, the Burning Legion started torturing Argus' world-soul, called Argus the Unmaker. Turalyon states the Legion harnessed his power to endlessly regenerate inside the Twisting Nether.[17]

On the first return to the homeworld since the evacuation on the Genedar, many draenei expressed shock, dismay, and sadness at witnessing what the Legion had wrought on the planet over the thousands of years in their absence. Though they do consider it the home they came from, it is clearly no longer feasible to think of resettling it, even if the Legion is defeated. Several, including Velen, have stated that they even look forward to leaving the shattered world behind. Only the Krokul of the Argussian Reach have expressed any desire to take back the planet.

Mac'Aree was the most sacred of the eredar's cities. According to Jessera of Mac'Aree, its walkways were lined with precious minerals and the rivers glittered even in complete darkness.[7] Mac'Aree has also been described as having purple hills.[20]

[The Last Relic of Argus] holds the inscription: "I long for Mac'Aree". The city now floats above the planet and has mostly escaped fel corruption, giving something of an insight into what Argus was like before its corruption.

Capital of the Burning Legion

Argus is saturated with the fel energies of the Burning Legion.[21] It is now bisected by a massive, hellish slash in the crust of the planet itself, where a portion of the planet has been blown into orbit. Krokuun lies on the edge of this rift, one of the removed portions is the city of Mac'Aree, and the Antoran Wastes lie inside of the rift on a cliff above the core of the world.

The area of Argus that Illidan Stormrage visited during the invasion of Outland was once a beautiful place of crystalline mountains and shimmering seas, but is now cold and cruel with a sense of corruption and loss. Jagged crystal mountains hold festering corruption within that cause them to crumble, and dust devils born of the powdered gems screech down canyons of serrated rock which refract light everywhere. There is a city which looms over canyons of fractured crystal and is laid out according to complex geomantic rules. The buildings resemble those of the draenei but far more grandiose. At the center of the city is a mighty palace that is home to Archimonde and Kil'jaeden. Within the palace's crystal corridors are runes which fill the mind with despair, visions of conquest, and a rage to end all things: the creed of the Burning Legion, written in fire.[22]

Below the surface of Argus, there are many dark and secret chambers where weapons are forged and wills are broken. The assassin Akaari Shadowgore spent centuries in these chambers, her essence being shaped, molded and intertwined with the power of her dreaded daggers, the Fangs of the Devourer. The souls of other eredar assassins were sacrificed and bound to hers, granting her the experience of a hundred lifetimes and thousands of kills.[23]

Argus was originally a world of the Great Dark Beyond.[24]

It thus appears to be a situation similar to Mardum, which was situated within the Nether but slowly started to appear in the Great Dark Beyond as well as its fel energies tore the veil between the two realms down,[25] but in reverse: Argus was in the Great Dark Beyond but as it was engulfed in fel, it has fully become part of the Twisting Nether. 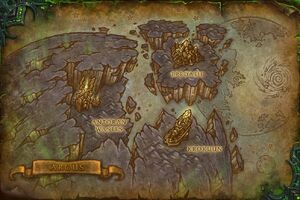 Argus could possibly be seen during the fight with alternate Gul'dan through a gigantic rift from which Gul'dan planned to summon in the Lord of the Legion, Sargeras. During the Kil'jaeden fight, his ship appeared into orbit above Argus. After defeating him, Argus could be seen in the sky of many zones on Azeroth in-game. After August 8, 2017, Argus appeared for all players regardless of if they had beaten Kil'jaeden or not. With Patch 7.3.0 it was added to the sky in Outland. This was done so it would appear over Azuremyst Isle for the new questline in the patch, and Azuremyst Isle is stored on the Outland "continent" in the game files.

Argus is featured in Legion's patch 7.3, with different regions, quests and instances in addition to a raid and other complementary features.[28][29] Argus is split into three zones: Krokuun, Mac'Aree, and the Antoran Wastes.

The area was designed with sandbox elements intended to be enjoyed even after you complete the main quest, with gameplay and challenges on the planet's surface reminiscent of past endgame areas such as the Molten Front, the Isle of Thunder, and the Timeless Isle. Argus is a no-fly zone, and an extensive network of teleportation hubs was added to compensate.[30]