For the vampiric elves also known as Darkfallen, see San'layn.

The Argussian Reach, also known as the Krokul or the Darkfallen,[1] is a faction associated to the broken of Argus based in Krokul Hovel.

The krokul of the Argussian Reach have a division of wranglers led by Jerek.[2]

The Sacred Stone at the Krokul Hovel let them hear the whispers of the planet, which steadies their hearts.[3] 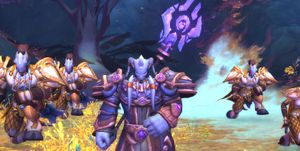 The eredar that remained behind during the flight from Argus

The Argussian Reach are eredar who chose not to ally with the Burning Legion, but did not flee Argus aboard the Genedar in order to buy time to Prophet Velen and the naaru.[4] The millennia of exposure to the fel changed them into Broken, and the Legion hunts down constantly, with those captured being enslaved and worked to death. They have survived this long by tunneling away from the Legion's eyes, hiding and adapting, for in their hour of need, the land still listens to their pleas.[5] They have migrated from one hovel to the next, moving each time the Legion discovered them, and as such, they have always been low on supplies like food, tools and weapons, for they are never able to flee with their possessions.[6]

During the War of the Ancients, Broxigar leaped into Argus and confronted Sargeras himself before being struck down by the Dark Titan. The Broken honored the warrior with a small shrine composed of his surviving necklace, boot, and shoulder pad.[7]

The Broken of Argus were first encountered by the Armies of Legionfall and the Army of the Light upon their arrival on Krokuun, where order champions rescued a number of them from the Legion's clutches.[8] Afterwards, Prophet Velen sought them out at Krokul Hovel in hopes that they would serve as allies in the war, only to discover Hatuun, bitter and angry over their "abandonment" by the Prophet, though they were halted by High Exarch Turalyon before the situation could escalate into violence.[9] To earn the trust of Hatuun and his people, Turalyon had the order leader deal with the pit lord Aggonar and save the Broken at the Annihilan Pits.[10]

After the death of Xe'ra, Hatuun requested reinforcements to the Petrified Forest. Lead Rider Jerek and his wranglers required assistance in recovering their talbuk mounts, for they stood no chance against even the smallest of the Legion's forces without them[11], and also requested a culling of the local panthara, as they threatened to hunt the wild talbuk down to extinction.[12] After the Forest was secured, Hatuun requested the retaking of Darkfall Ridge in order to rescue his people from Nath'raxas Hold, culminating in a rescue mission conducted by order followers.[13]

The Argussian Reach would provide their support to the war effort for the remainder of the conflict, offering their ridgestalkers in exchange for supplies.[14]

Although many struggled to oppose the Burning Legion's conquest of Argus, not all were able to escape. Emboldened by the arrival of new allies, these refugees and outcasts stand united in their mission to reclaim their home.

[110W] Invasion Onslaught award 1,000 reputation each for both factions as well.

[Demon's Soulstone] can also be used to earn reputation with the faction.

Reaching Exalted status with the Argussian Reach awards the

[Protector of the Argussian Reach] achievement. Additionally, achieving this standing is one of the requisites for unlocking the void elf allied race.