Ariok is a Blackrock orc initially encountered at Flamestar Post (only visible to Horde players), in the contested territory of Burning Steppes. He later moves to Chiselgrip and finally Flame Crest. He is the son of Eitrigg.

For Alliance players, his counterpart is John J. Keeshan, who offers the Alliance version of his quests.

Ariok is a Blackrock by birth and spent a large part of his youth inside Blackrock Mountain.[2] He doesn't share their goals and objectives. He has befriended and received help from the Dark Iron dwarves of the Thorium Brotherhood more than once.[3]

Ariok works closely with his father in order to prevent the Blackrock clan from invading the Redridge Mountains. However, while Ariok respects his father's plan, he serves his own sense of justice and believes it's time to end the treachery of the Blackrock clan for good. He enlists Horde adventurers to thin the herd and eliminate the leadership of the Blackrock orcs and their allies within the Burning Steppes. The Dark Horde leadership within the Burning Steppes is eliminated in the end, with the culmination of Eitrigg's and Ariok's plan seeing High Warlock Xi'lun unable to control the Pitlord he summoned. The uncontrolled pitlord consequently wipes out most of the Blackrock forces. 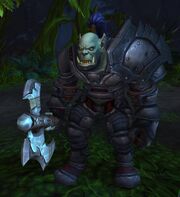 Ariok was part of the initial Azerothian expedition to Draenor and was seen fighting Iron Horde Grunts alongside many others at the Dark Portal in Blasted Lands and Tanaan Jungle. During the Assault on the Dark Portal, Khadgar tasked him and the adventurers with distracting the Eye of Kilrogg at the Bleeding Altar so the rest of the group could advance without being noticed. However, Kilrogg Deadeye and the Bleeding Hollow Clan spotted them and prepared to attack the group. Ariok empowered himself with the blood magic of the Bleeding Hollow and attacked the Warlord in order to buy the rest of the group time to escape.[1]

Ariok survived his encounter with Kilrogg and still remains in the form of a hulking berserker. Adventurers follow Ariok into Zeth'gol to discover the Bleeding Hollow Clan's plans. Obtaining Kilrogg's eye would show what and where Kilrogg was, as well as anger the spirits. With Ariok distracting the restless spirits, the adventurer spies on Kilrogg and oddly enough Gul'dan. Kilrogg, panicking that his home is in danger and wants to pull back, is told by Gul'dan that his men need to continue searching for the cipher. Ariok wanted to know what happened when the adventurer used the eye afterward. Enraged after he was told, he sprinted to Hellfire Citadel to end Kilrogg before he loses everything.[4]

Ariok has been imprisoned in Hellfire Citadel by Kilrogg. Succeeding in keeping him alive when fel substance is pouring into him will result in Ariok becoming a follower.[5] As Ariok has not been seen since it is unknown if his rescue by players is canon.

I serve my father and respect his plan... but I also serve my own sense of justice. I have seen enough treachery from my Blackrock brothers to fill a thousand books. And now they plan to invade Redridge, for no reason other than blind territorialism.

The treachery stops here. It's time for the final chapter. And it's not going to be a happy ending.

What can I do to help? 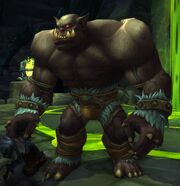 Intro
Kilrogg Deadeye yells: Why do you resist your own blood, Ariok? Give in to your rage.
Ariok yells: Release me from these bonds and I will show you my rage, Kilrogg!

Low health
I will die before I serve the Burning Legion!

[A Race Against Slime]
I am in your debt, heroes. My strength is yours.

On approach
Blood and honor, commander.