Arluin is a nightborne of Suramar and a secretive member of The Nightfallen resistance. While he is an ally to the rebellion cause he will not lend his services unless he is given equal compensation,[1] the reasons for which are not revealed until his death. He is found within the alleyways of the Evermoon Bazaar in Suramar City.

Arluin apparently always had a habit of not being able to stay out of trouble but remained close to his sister.[2]

After the public execution of Margaux, a friend and sympathizer of the resistance, Vanthir sent the class leaders to Arluin so that he would be able to help in getting revenge for the rebellion, although it's clear the tavern owner doesn't think too highly of Arluin's apparent lack of altruism. Arluin would offer his services as an informant, but he did not come cheap, his first request being a hefty sum of

His next request was a shipment of Arcwine meant for the Grand Magistrix, but with the help of one of his men the adventurer is able to intercept it.[4] His last request for the time being was to keep his stash of contraband from being taken, with the death of Auditor Yvenne preventing the location from being revealed.[5]

With his compensation filled, Arluin was able to find the home of Overseer Durant, the murderer responsible for the death of Margaux, but the adventurer would need help taking him down so Arluin gave the names of three associates: Cyrille, Lorin and Sylessa. With their help, Durant was finally killed, and Margaux avenged.[6]

With Ly'leth Lunastre in the running to become an advisor to the Grand Magistrix in order to help the resistance, she would need undercover help as her supporters would not be enough, and so Vanthir called for Arluin's services yet again, who required an even higher payment of Ancient Mana.[7] Arluin tasked the adventurer to deal with the two noble Houses that were the biggest threat: kill the felborne Ruven Duskmere, then spread rumors among the grieving House Duskmere nobles to redirect the suspicion to Coryn Stelleris.[8] These efforts eventually culminated in the honor duel between Coryn and Ly'leth, with the latter walking away as the new advisor.[9][10]

Arluin reappears one last time to lend his services (with payment to be received afterward) to Thalyssra and the adventurer in the Arcway, in order to create a critical surge in the leylines to feed the arcan'dor in Shal'Aran. As the trio head through the tunnels to the Nightflow Conduit, Arluin picked the lock for a door that they needed to get through. When Thalyssra tries to activate the

[110G] Ephemeral Manastorm Projector, she realizes that its fuse, which acts as a timer, is broken. Forced to turn it on manually, Thalyssra puts up a barrier to wait out the manastorm, but over time it only begins increasing in power. Seeing no other choice, Arluin runs out of Thalyssra's protective barrier and deactivates the projector himself, the manastorm injuring him fatally. After Oculeth teleports the trio back to Meredil, Thalyssra checks on Arluin, who is gratified to know they succeeded before he dies moments later. Through his sacrifice, the arcan'dor would get the proper arcane energy it needed, causing it to grow fruit.[11][12] 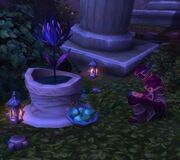 Arluelle in front of her brother's memorial.

In the event of his death, Arluin had written a last will and given it to Vanthir, which read that any rewards for his efforts were to be given to a woman named Arluelle, and mapped out where she could be found. Stating that Arluin had likely known what the end result of his sacrifice would mean for the nightborne, Vanthir admits that he was wrong about him.

The adventurer found Arluelle in Suramar City, gave her the arcan'dor fruit and explained that Arluin had given his life for it.[13]

Arluin's sacrifice would never be forgotten. Arluelle, now a healthy nightborne, reveals herself as his sister. She joins the rebels to avenge Arluin and to repay for the new chance at life she had been given, she kneels in front of a small memorial, where her brother's body rests.[14]