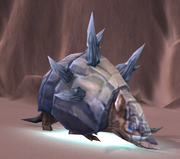 During the Assault on Uldum.

Armagedillo is a huge, spiky level 84 rare armadillo which may be encountered in the bone-strewn area of desert between Orsis and Mar'at in central Uldum.

Armagedillo, despite his fearsome name, is not much of a challenge for a player of the appropriate level. He does not hit very hard, aside from his fire-based attacks, which can be easily avoided or interrupted.

When you first engage it Armagedillo will immediately charge to melee range if you were not already within five yards of it. Even on cloth, Armagedillo only melees for about 3,000 damage. Every few seconds he will start to cast one of his fire attacks, which can be easily avoided by moving out of the way during their cast time. Flame Breath will hit for several thousand fire damage. The only attack Armagedillo has that is of any real concern is "Dillogeddon", where it will stand on its hind legs for four seconds before slamming back down, releasing huge gouts of flame in the area surrounding itself. Dillogeddon hits for considerable amounts of fire damage, so it is probably advisable to run out of its ten-yard radius when Armagedillo begins to cast it. Otherwise, Armagedillo is an easy kill.

Armagedillo will only drop one piece of loot:

He can also be skinned by Skinners of the appropriate skill level. 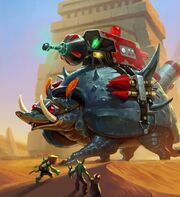 Armagedillo appears as a legendary card for the warrior class in the Saviors of Uldum expansion for Hearthstone. In Hearthstone lore, the creature has been outfitted with advanced weaponry by Blastmaster Boom, making it even deadlier than before.[1] Armagedillo's flavor text reads: "We may never know what provoked it, but we will never forget the consequences."