The Armies of Legionfall[1] are a coalition of all orders united to defeat the Burning Legion at the Tomb of Sargeras. Their base of operations, Deliverance Point, is located south-west of the island of Thal'dranath.

In addition to the orders, the Armies of Legionfall are also allied with the Court of Farondis, the Azurewing, the Nightfallen, the Highmountain Tribe,[2] and the Wardens, as evidenced by their assistance to the Legionfall Commander.

The coalition of orders dedicated to defeating the Legion at the Tomb of Sargeras and Broken Shore. 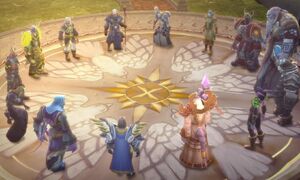 Khadgar and Velen with the champions of the orders