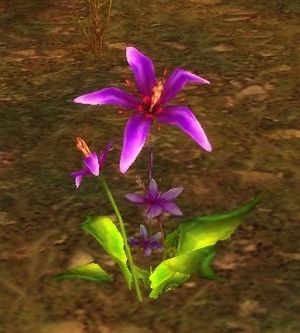 Arthas' Tears is an Herb that can be gathered with Herbalism (220).

This item can be gathered by herbalists from the corpses of plant mobs in Dire Maul and Maraudon.

Prior to Cataclysm, Arthas' Tears could be found in Western Plaguelands, Eastern Plaguelands and Felwood. These nodes appear to have since been replaced with those of other herbs.

When Razorfen Downs was updated for Patch 6.0.2, the remaining nodes for this herb were replaced with other herbs or removed entirely.

Milling Arthas' Tears can give the following: