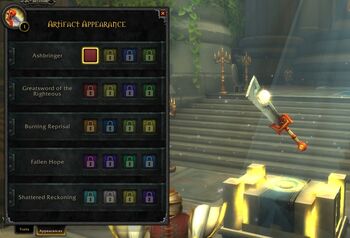 [Ashbringer] at the paladin Class Hall.

Artifacts are a special type of weapon introduced in Legion, and the only weapons players would wield over the course of the expansion.

Players can acquire these new weapons early in the expansion's run, and the weapons grow in power alongside them. Artifact Power can be earned by engaging in most types of play, and can be spent to unlock a unique tree of traits, enhancing abilities. Players can also obtain relics and use these to upgrade the artifact itself. Artifacts also come with an extensive range of visual customization options.

There is an artifact for each class specialization, 36 in total, plus an additional one for

Fishing. Obtaining each artifact involves a unique questline to seek out these powerful weapons.

Following the Broken Shore experience, players set about acquiring the artifact for their character's current specialization. The artifacts represented a greater power than the heroes of Azeroth had ever wielded before, a power which was needed in order to defeat the Burning Legion.

The process of acquiring an artifact is determined by the character's class and spec. A catch-up mechanism was added to reduce the time taken to earn artifact power for secondary specializations and alts.

Patch 7.3.5 added the send-off for artifact weapons and as such ended the Legion storyline, with the weapons having to be used in order to neutralize the sword Sargeras used to impale the world in Silithus. Some visual effects represented the instability that resulted from the send-off, with for example Artifact Power varying wildly.[1]

With the release of patch 8.0.1, the artifact weapons can continue to be used as normal weapons, but all traits added to the weapon was "burned away", and disabled. The main artifact ability was also no longer usable, however, some were introduced as talents to the class (such as

[Wake of Ashes]). Any relics added to the weapon would continue to increase the weapon's item level, but no longer offered any traits. Netherlight Crucible augments also ceased to benefit the weapon. All artifact traits were disabled as the final result of the artifact instability.[2]

As of patch 9.0.1, the ability to transmog any artifact appearance for any Specialization was made available, previously players were only able to while within its corresponding specialization.

The path of customization options for

Artifacts can be customized and powered up at order halls with artifact power, earned from adventuring, completing quests, beating dungeon bosses, winning PvP objectives, and so forth. Artifact power is used to unlock traits which increase the power of the weapon and the character.

Each artifact has a unique "trait tree", a grid overlaid upon the outline of the weapon itself, resembling the old talent trees. Players can spend artifact power to activate additional traits, moving along the tree; once a trait is activated, all connecting traits become unlocked. Many traits have multiple ranks. Majorly impactful traits are called golden traits.

Artifacts also have Relic slots. Relics are artifact-only objects with a major impact on the overall power of the artifact, such as its basic damage and item level. The relic system acts as a substitute for the upgrading of weapons seen in previous expansions; rather than switching to a new and more powerful weapon, the player slots a new and more powerful relic into their artifact. 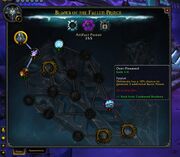 The path of customization options for Blades of the Fallen Prince.

Several different looks are available for each artifact. These can be unlocked through various activities. One look for each artifact will only be available through PvP.[3] Each look appears to come with unique flavor text, and background lore. Players are also able to unlock three additional colors of the various looks. In the case of Feral and Guardian druids, changing the look of the weapon also changes the look of the form to match. In addition, it is hard to obtain items for every specialization that unlocks an additional appearance (with 3 recolors unlockable).