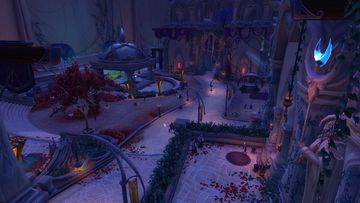 The Artisan's Gallery (or Lunastre Lane)[1][2] is a small district located in the southwest portion of the nightborne city of Suramar. The gallery is presumably the main center for the arts within Suramar, featuring stages and platforms for the public display of oratory, music, theater, and other forms of entertainment.

Found in Suramar's lower section, the district is surrounded by several other suburban areas, including the Evermoon Commons and Starcaller Retreat to the east and south, as well as the Shimmershade Garden to the north. The Artisan's Gallery is a major meeting place for Suramar's citizens, with large crowds frequenting the district often. Though it lies generally deep within the city proper, there is access to Suramar Bay from a small jetty in its southwest corner.

Since the beginning of the Nightfallen rebellion, the gallery has been heavily occupied by demons of the Burning Legion, along with a large number of Duskwatch security forces. As such, it has become a particularly hostile area for any rebel agents. In turn, it is a spot regularly frequented by individuals loyal to the regime of Grand Magistrix Elisande, with many of her loyalists present throughout the district.

The large presence of demons and Duskwatch led to the Artisan's Gallery remaining an especially dangerous location for Nightfallen agents throughout the civil war in Suramar. Despite this, the gallery did receive some of the insurrection's attention; it was involved in a large propaganda campaign as notices in support of the rebellion were placed in public in prominent locations.[3]