Arygos was an ancient blue dragon and offspring of Malygos. During the War of the Shifting Sands, he was taken captive by the qiraji. After the short-lived races freed him from his 1,000-year imprisonment Arygos openly sided with his father Malygos during the Nexus War. Following the death of his father Arygos wanted to ensure that he was chosen to be the leader of the blue dragonflight and allied himself with Deathwing, but was later betrayed and killed by the Twilight Father.

When Malygos was driven mad by the loss of his flight during the War of the Ancients, he was so lost in his insanity that he abandoned the clutch of eggs that contained both Arygos and his sister, Kirygosa. Korialstrasz discovered the untended clutch, as well as many others, and took it to Nozdormu. Later, the clutches were given to the red dragonflight to care for after they hatched. It was a rare example of cooperation among three separate flights with a common cause: care of the unhatched, helpless whelps when they emerged from the shell. 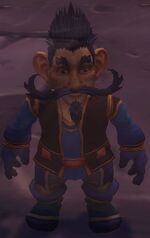 When the qiraji started their first invasion of Kalimdor, Anachronos agreed to enlist the bronze dragonflight against the marauding qiraji with the night elves. Even with the might of the dragons backing them, however, the sheer numbers of the qiraji and silithid proved overwhelming. And so Anachronos called upon the progeny of the remaining flights, including Arygos of the blue dragonflight.

Arygos, along with Caelestrasz and Merithra, pushed the qiraji back into Ahn'Qiraj to allow Anachronos, Fandral Staghelm, and the night elves to create a magical barrier to hold in the qiraji. The three dragons and their companions flew headlong into the qiraji legions, into the city where they hoped their sacrifice would not be in vain. Though the magical barrier was created, the three dragons were lost within the walls, where they still remained for the next 1,000 years, in humanoid form, as prisoners of the Old God C'Thun.

Andorgos, along with Kandrostrasz and Vethsera, later came to the Temple of Ahn'Qiraj after sensing their enslaved brethren deep inside the qiraji city. However they were unable to attempt to rescue their flight members without also falling prey to same spell which held Caelestrasz, Arygos, and Merithra as C'Thun's slaves. The three waited at the entrance of the temple hoping to find adventurers who would venture into the city to free their brethren, and provided the adventurers with powerful pieces of armor in return for bringing them specific items obtained from defeating C'Thun and his minions.

Arygos and the rest of the captive dragons were ultimately freed by the death of C'Thun.

By the time of the opening of the Dark Portal, Arygos had returned to the Nexus in Northrend. Tyri pulled all of the damaged nether dragons from Outland to the Nexus, as she had figured that the energy of the Nexus would stabilize them. Zzeraku, finally having enough of everyone trying to master his flight members, declared that they will gain the power of the Nexus then take over Azeroth. Tyri tried desperately to talk him down which almost succeeds till Arygos showed up and attacked the nether dragons, which kicked off a fight between the blue and the nether dragonflight. In the midst of the chaos, Malygos awakened from his slumber. In his insanity, Malygos misinterprets the nether dragons arrogant proclamations of being the embodiment of the Nexus and absorbed them and their power. The dragon's Nether-warped physiology began to affect the Spell-Weaver himself, ultimately helping him regain some of his lost sanity.[1]

After recovering from his long depression, Malygos took note of the large number of mortal spellcasters running around Azeroth, recklessly using arcane magic. Thus he deemed the lesser races' use of magic as unacceptable, and he proceeded to declare war on all magic users. Arygos openly sided with his father Malygos during the Nexus War, while Kalecgos - and Arygos' sister, Kirygosa - stood against him.

In Alexstrasza’s opinion, Arygos was even more elitist than most of his flight. She suspected this had to do with the young blue's personal history during the Nexus War. Arygos’s clutch sister Kirygosa had gone missing before the war ended. The unhappy but realistic conclusion was that the young blue, pregnant with her first eggs, had fallen in battle. And because she had always dared to stand up to Arygos, and had sided with those few blues who had turned against Malygos, there was an extra layer of tragedy in that it was likely she had been slain by a member of her own flight.

A New Aspect of Magic 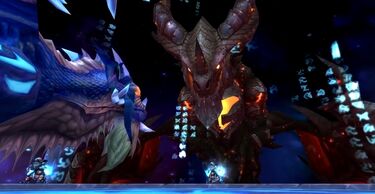 After Deathwing shattered the world, Alexstrasza, Ysera, their dragonflights, and the blue dragonflight came together at Wyrmrest Temple to try and figure out a way to fight against him. During the meeting, Arygos continuously accused Alexstrasza of meddling and causing his father's unnecessary death. Kalecgos defended Alexstrasza's position, but the argument quickly faded as the twilight dragonflight, led by the Twilight Father, attacked Wyrmrest Temple.[2]

In truth, Arygos wished to ensure his own succession as leader of the blue dragonflight, and had allied with Deathwing and the twilight dragonflight to assure this.[3] The dragon also believed that with their aid he would have an army powerful enough to end those who had wronged him and his father, in particular he nursed a bitter hatred toward Alexstrasza and the mortals who struck down Malygos.[4] When Thrall later arrived at the Nexus, Arygos told his guards to simply kill him and the bronze dragon that brought him there, but Kalecgos intervened on Thrall's behalf. Arygos left the Nexus, secretly meeting with the Twilight Father at Wyrmrest Temple to discuss plans that would ensure his own position as the next Blue Aspect. However, the Twilight Father was angry that Arygos had not yet killed Thrall, whose death was vital to his plans.[2]

When it became clear that his flight's loyalties were torn between himself and Kalecgos, Arygos attempted to have him killed by the twilight dragonflight. The blue dragon Tarecgosa intervened, however, sacrificing herself to save him.[5] To end the debates and arguments, the flight agreed to meet during the Embrace to choose a new Aspect.[6] While Arygos preached of a future in which the dragonflight would continue to hoard the world's magic for themselves in order to survive the Cataclysm, Kalecgos felt that the blues should accept responsibility for the Nexus War and instead use magic responsibly for the good of all Azeroth.[7] As the Celestial Embrace occurred and the two moons crossed, Arygos flew into the sky above the Nexus and insisted that as Malygos's son, it was his birthright to become the new Aspect. However, the blue dragonflight instead chose Kalecgos, who was bathed in the light of the moons and transformed into the new Aspect of Magic. Arygos called them fools and departed to the Eye of Eternity to meet with the Twilight Father, the twilight dragonflight descending upon the other blues in his wake.[2]

There he met an alternate timeline version of Aedelas Blackmoore, who had been brought by the infinite dragonflight to kill Thrall. Arygos believed that such an act would shake Kalecgos's faith and, hopefully, change the minds of the other blue dragons so that he could become the Aspect instead. Blackmoore agreed and mounted Arygos, only to plunge his sword into the back of the dragon's skull, killing him. The Twilight Father used the blood of Malygos's son to activate the Focusing Iris and siphon the magic from the Nexus into the massive chromatic dragon Chromatus, bringing it to life.[2]

Within the Temple of Ahn'Qiraj, Arygos - in the form of a gnome - offers the quest

[60R] Imperial Qiraji Armaments. This quest requires you to collect

[Imperial Qiraji Armaments] and three Elementium Ingots. He crafts and rewards one of the the following weapons, which - according to him - "will become a force of reckoning":

Ahn'Qiraj flavor I bear witness to a miracle that stands before me! In one thousand years of captivity, I have not seen a single living specimen - other than those foul Qiraji and silithid - enter these chambers.

During the War of the Shifting Sands quest
Let them feel the wrath of the Blue Flight! May Malygos protect me!