Ascension of the Lich King

The Ascension of the Lich King[1] (also called Rise of the Lich King)[2] was a conflict waged by Illidan's forces and the Undead Scourge, with interventions by the night elven government and Burning Legion. It started when Kil'jaeden commanded that Illidan Stormrage destroy the Frozen Throne. Set one year after the Battle of Mount Hyjal, the campaign was minor in comparison, though the end result paved the way for the Undead Scourge to reach the height of its power until the War against the Lich King. These events were chronicled in Warcraft III: The Frozen Throne.

When the Horde of Draenor was defeated by the Alliance Expedition, Ner'zhul ventured through a portal in an attempt to escape Draenor's destruction and find other worlds to conquer. He was captured by Kil'jaeden, who destroyed his body and tortured his spirit until the orc agreed to serve him again. Once he did, Kil'jaeden bound his spirit to the Helm of Domination, trapped him in the Frozen Throne, and sent it to Azeroth. The Lich King remained in the Frozen Throne, atop a spire in the Icecrown Glacier, and plotted his freedom while he seemingly served the Burning Legion.

During the Third War, Illidan Stormrage was released by Tyrande after ten thousand years of imprisonment.[3] He would eventually consume the power of the Skull of Gul'dan, and use its power to kill the powerful demon lord Tichondrius the Darkener.[4]

The remaining nathrezim demons in Lordaeron didn't know about Archimonde's death, unlike the Scourge leaders Kel'Thuzad and Sylvanas Windrunner. Detheroc, Balnazzar, and Varimathras were told by King Arthas as he returned from Kalimdor.[5] Kil'jaeden, on the other hand, was aware of the Legion's fall but did not believe that all was lost. He was still confident about the Scourge, the dreadlords, and the Lich King. When he reached to the Lich King, however, the entity refused him.[6] Kil'jaeden realized that if the Lich King conquered Azeroth, any future demonic invasions would be nearly impossible. He was angered by Archimonde's defeat but this betrayal was a bigger concern than vengeance.[7] He sensed a new demon who could complete the task of destroying the Lich King.[6] Months after the battle, Kil'jaeden found Illidan Stormrage and convinced him to destroy the Lich King.[8]

Rise of the naga

Kil'jaeden told Illidan that his creation, the Lich King had betrayed him, but that his spirit was still trapped in the Frozen Throne of Icecrown. In exchange for the destruction of the Frozen Throne, Kil'jaeden promised to grant Illidan his heart's desire.

To do so, Illidan summoned the naga to the surface of Azeroth for the first time in ten thousand years.[9] Queen Azshara appointed Lady Vashj as the leader of Illidan's naga.

Maiev Shadowsong, the warden who served as Illidan's jailor, followed Illidan's trail in a quest to recapture him. She tracked him through Azshara until he escaped by boat.[10] Continuing the chase, Maiev and her Watchers followed him to the Broken Isles.[11] At the Tomb of Sargeras, Maiev found old runes left by the evil orc warlock Gul'dan. The runes revealed the presence of a powerful magical artifact hidden within the tomb. Fearing that Illidan would become more dangerous than ever with such an artifact, Maiev pursued Illidan deeper into the tomb. By the time they found the Betrayer, however, he had already obtained the Eye of Sargeras. He used the Eye trying to kill Maiev and her Watchers by making the tomb collapse upon their heads. This resulted in the deaths of many of Maiev's followers - including her trusted lieutenant, Naisha. Maiev herself was able to escape due to her

When she returned to her base, Maiev found her forces under attack by Illidan's.[13] She sent a runner back to Kalimdor to ask Malfurion Stormrage and his lover Tyrande Whisperwind for aid.[14] With the aid that the druids and the Sentinels provided, the united night elves were able to push Illidan's forces back from Maiev's base. They forced the Betrayer to flee to Lordaeron, where he would try to continue his quest despite the pursuit of the night elves.

Malfurion and his allies landed in the Tirisfal Glades. Malfurion left to examine the corruption of Lordaeron's woods while Maiev and Tyrande continued the hunt. In their search they met Kael'thas Sunstrider, prince of the blood elves. Though he had not heard anything about a demon, Kael'thas and his men had been attacked by the undead that were stationed at Dalaran, and were planning on escaping across the River Arevass. To gain the aid of his blood elves in the hunt for Illidan, Maiev and Tyrande agreed to help him across the river. However, the caravan came under siege by the Scourge. In the last battle to cross the river, Tyrande used

[Starfall] on the bridge and stopped the undead wave from pursuing their weakened men. The bridge collapsed and Tyrande fell into the river, where she was swept away by the currents. While Kael'thas wished to rescue Tyrande, Maiev insisted that Tyrande knew the risks and demanded his help in locating and capturing Illidan.[15]

The spell at Dalaran

In the meantime, Malfurion discovered that Illidan was using the Eye of Sargeras to damage Northrend.[16] When he returned to Maiev outside Dalaran, the warden told Malfurion that Tyrande had been torn apart by the undead (as she did not want Malfurion to abandon the hunt to search for her). They confronted and battled Illidan's Naga and the Scourge, rescued Magroth the Defender and finally stopped Illidan's spell against Northrend by killing the naga summoners. This left the Eye of Sargeras unstable and resulted in its destruction. Enraged, Illidan called the others fools and explained that his objective was to destroy their common enemy by striking at the Lich King's stronghold of Icecrown. Malfurion chastised Illidan for not thinking about the consequences and blamed him for Tyrande's death. When Kael'thas pointed out that she could still be alive, Malfurion trapped Maiev for her deceit and left to find Tyrande with Illidan's aid.[17]

Malfurion and Illidan battled a heavy Scourge presence. After holding the line against the six Scourge bases and defeating a forest troll tribe, Illidan rescued the Priestess of Elune personally.[18] As a result, Malfurion allowed Illidan to depart without further pursuit from the night elven government. Illidan opened a portal and traveled to Outland. Despite Tyrande's warnings, Maiev continued to independently lead her forces to chase him.[19]

Although Illidan's indirect attack on the Frozen Throne did not succeed, the damage caused by his spell had ruptured the Frozen Throne (widening the rift Frostmourne made when Ner'zhul pushed it from the throne for Arthas to find). As a result, the Lich King's powers were waning rapidly.[20]

Curse of the blood elves 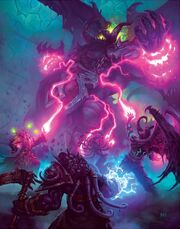 When Kael'thas returned to Dalaran he reported to Grand Marshal Garithos. Garithos informed Kael that a massive undead army is marching towards the Alterac mountains seeking to reclaim Dalaran. While the Alliance army moved to the front to repel them, Kael was ordered to repair the observatories near the city since they were also been told that a second strike force advance through Silverpine Forest. Kael backed by Alliance troops had managed to beat the undead and repair the observatories. Kael was then reported that the second strike force is heading towards them but as he was prepared to repel them, Garithos had ordered all human and dwarven troops to the front thus leaving Kael only with his blood elves and with no calvary and artillery support.

When his forces were beset by the Scourge, Kael'thas accepted aid from Lady Vashj and her naga.[21] For this, his commander, Grand Marshal Garithos, charged the blood elves with treason,[22] sending them to the Violet Hold.

With aid from Vashj, Kael and his soldiers were able to escape the dungeons of Dalaran.[23] They went through a portal that brought them to Outland.[24] Kael stated that, if Illidan could cure the magic addiction suffered by his people, they would serve him gladly.[25]

Kael and Vashj soon found Illidan, who had been once again captured by Maiev. They defeated her forces and released him.[26] Illidan explained that he came to Outland to hide from Kil'jaeden, who would no doubt be outraged by Illidan's failure to destroy the Lich King. Kael pledged himself to Illidan's service.[27]

Illidan sought to depose the pit lord Magtheridon and take control over Outland. He planned to close the dimensional gateways Magtheridon used to bring reinforcements to Outland. Akama and his broken draenei swore to serve Illidan if it meant defeating Magtheridon and his fel orc and demonic armies.[28]

Fall of Magtheridon and Kil'jaeden's command

Illidan and his allies stormed the Black Temple. After overcoming armies of fel orcs and demons (along with various traps), they confronted and defeated Magtheridon.[29] Moments after Illidan proclaimed himself the new Lord of Outland, Kil'jaeden appeared. He chastised Illidan for his failure, but offered him one more chance: destroy the Frozen Throne or face his eternal wrath.[30]

Legacy of the Damned

The return to Northrend

As a result of his growing weakness, the Lich King began losing control over his minions. Aware that Kil'jaeden's reprisal was coming, he ordered his champion, King Arthas, to return to Northrend and defend him.[31] The weakening of the Lich King on Hallow's End's day[32] resulted in a split of the undead legions into the Legion-loyal Dreadlord Insurgents, a group of free-willed undead led by Sylvanas (who would later become the Forsaken) and his own Scourge followers which started a war between them and also the Alliance resistance. After surviving an assassination attempt by Sylvanas Windrunner, Arthas set sail for Northrend.[33]

Arriving in Northrend, Arthas met the crypt lord Anub'arak. In order to reach Icecrown in time to save the Lich King, Anub'arak suggested traveling through Azjol-Nerub.[34]

Arthas and Ner'zhul merge to create a new Lich King.

With Illidan out of the way, Arthas ascended the spire and shattered the Frozen Throne with Frostmourne. He donned the Helm of Domination and merged with Ner'zhul to become the second Lich King.[37]

Illidan's forces retreated to Outland, becoming a prominent force there. After defeating Magtheridon's forces, many of Magtheridon's underlings became part of the Illidari. Illidan imprisoned Maiev Shadowsong and left Akama as her jailer. Illidan's forces were able to avoid Kil'jaeden's attempt to punish Illidan. Illidan's reign would eventually come to an end.

The Plaguelands civil war, which resulted in the creation of the Forsaken and the annihilation of the Alliance resistance, was also a result of Illidan's attempt to destroy the Lich King remotely using the Eye of Sargeras in Dalaran.

The new merged Lich King hunted down the few survivors of the Illidari expedition and many of them were raised in undeath as members of a new dark force of the Scourge. Kel'Thuzad led the Scourge in Lordaeron until the Lich King awakened and declared war against the living.