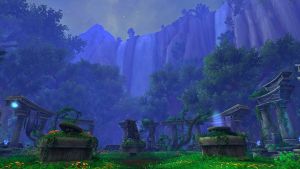 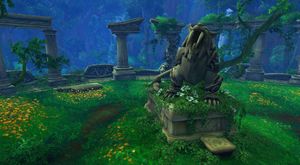 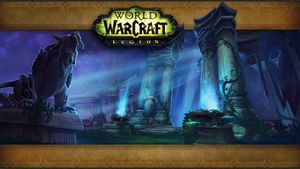 Ashamane's Fall is a small temple tucked away in the northeastern corner of Val'sharah. 10,000 years ago during the War of the Ancients, the mighty Wild God Ashamane fought relentlessly against a mighty demon known as Ronokon. Ashamane was able to defeat Ronokon, but in his death, a magnificent amount of fel energy exploded from his body that killed Ashamane and altered the landscape forever. Her sacrifice saved countless lives, and to honor her, a great shrine was built in Val'sharah at the site of her demise.[1] They also placed her fangs here and to this day, a group of druids known as the Ashen keep watch over the shrine.[2]

Occasionally Leafbeard the Storied, an ancient of lore, will appear here and tell stories about the War of the Ancients.

It is also an instanced PvP arena.