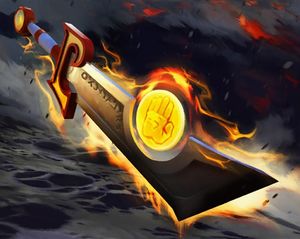 The Ashbringer is a powerful sword named for its ability to slaughter the undead and leave nothing but ash in its wake.[1][2] It shares its name with its original wielder, Alexandros Mograine, the former Highlord of the Silver Hand known as the Ashbringer.[3]

Alexandros' oldest son, Renault, betrayed and murdered him with the sword, transforming it into

[Corrupted Ashbringer]. Alexandros was resurrected as a death knight to lead the Four Horsemen of the Scourge in Naxxramas, and kept the sword until his youngest son Darion killed him and reclaimed the blade. Darion later discovered his father's soul had become corrupted and trapped in the sword. Darion plunged the sword into his own heart to redeem his father's soul. His death resulted in Darion becoming a death knight of the Scourge. The sword was eventually purified after Darion betrayed the Lich King and relinquished it to Tirion Fordring.[4]

Fordring wielded the Ashbringer throughout the Argent Crusade's campaign against the Scourge in Northrend, and used it to shatter Frostmourne and defeat the Lich King in the culminating encounter.

The sword's story has been slowly revealed since World of Warcraft's inception, and it had a pronounced role in Wrath of the Lich King, but players were unable to wield it until the release of Legion.

The Ashbringer is featured in a titular four-part comic book mini-series.[5] 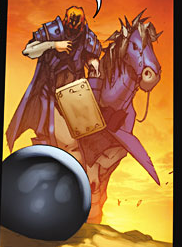 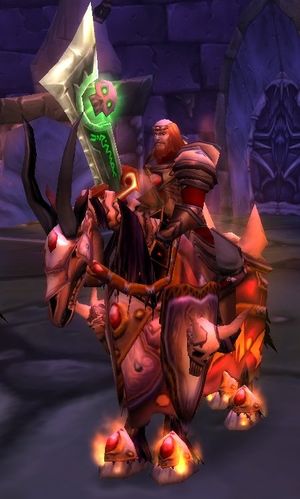 During the siege of Blackrock Spire in the Second War, Highlord Alexandros Mograine found a mysterious, dark crystal on the body of a dead orc warlock. The crystal was the "living embodiment of shadow" and originated from Draenor.[2] Upon touching it, Mograine's hand became tainted and could not be healed.[6]

Mograine kept the crystal a secret for years until just before the Scourge invasion of Lordaeron. He revealed it to the other leaders of the Silver Hand, suggesting that they try to find the crystal's antithesis — a manifestation of the Holy Light itself — that could be used against the impending undead invasion. Mograine's peers were appalled at the sight of the dark crystal and tried to destroy it with holy spells. Unexpectedly, the crystal absorbed the spells and became the crystal of pure light that Mograine mentioned moments before. The group agreed to forge a weapon from the crystal that would smite the undead with such power that only a cloud of ash would remain in its wake.[2]

Mograine and Fairbanks traveled to Ironforge, where Magni Bronzebeard forged the blade on the Great Anvil. Magni hoped the sword would be used to avenge his brother, Muradin, whom he believed had been killed by the Scourge.[7]

Fall of the Highlord

After Arthas' betrayal, the remaining leaders of the Silver Hand banded together to fight the undead of the Plaguelands. The Ashbringer became the most lethal weapon in their arsenal — and it quickly garnered the attention of Kel'Thuzad. Balnazzar (in the newly-possessed body of Grand Crusader Saidan Dathrohan) sought to manipulate the remnants of the Silver Hand to advance his goals for the Burning Legion. After Mograine stated his intentions to attack the Undercity, Balnazzar put plans into motion to eliminate Alexandros in order to protect his brother, Varimathras (who was manipulating Sylvanas Windrunner and her Forsaken).

Balnazzar made a pact with Kel'Thuzad to eliminate Alexandros and end his threat to both of them. Balnazzar corrupted one of Alexandros' sons, Renault, and set a trap for the Highlord. Renault led his father and High Inquisitor Fairbanks to Stratholme, where legions of the Scourge awaited them. Renault hid while Alexandros and Fairbanks fended for themselves. Fairbanks eventually became trapped alive under a pile of corpses. Alexandros alone continued to smite thousands of the undead, but eventually became weary and dropped Ashbringer. Renault came out of hiding and slew his father with the sword, which corrupted the blade. Later, Kel'Thuzad resurrected Alexandros as one of his death knights of Naxxramas and reclaimed his corrupted blade. Balnazzar gained complete authority over the remnants of the Silver Hand that reformed as the Scarlet Crusade, and Renault became Commander of the Scarlet Monastery.

Seeking to free his father, Alexandros' other son Darion led a mission into Naxxramas with a small party of Argent Dawn members. Upon finding him, Alexandros was unresponsive to his son's pleas and attempts to redeem him, forcing Darion to reluctantly kill him. Darion took the corrupted Ashbringer, with his father's spirit bound to it. Alexandros's voice led Darion out of Naxxramas to Renault at the Scarlet Monastery. Darion confronted his brother, who lashed out and attempted to kill him. Before Renault was able to deal the final blow, Alexandros' spirit emerged from Ashbringer and decapitated him, saving Darion. The spirit of Alexandros then retreated back into the blade.

Some time later, during a Scourge assault on Light's Hope Chapel, Darion impaled himself with the corrupted Ashbringer in another attempt to free his father. While successful, Darion was resurrected as a death knight and became Highlord of the Death knights of Acherus. 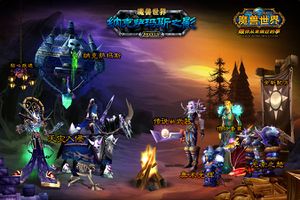 The promotional image from WoW China with Ashbringer erroneously featured.

Ashbringer was the subject of intense rumors and speculation during the early years of World of Warcraft. At launch, the only mention of the weapon's existence was by Caretaker Alen. This, combined with a datamined Ashbringer from the game's files, created rumors among players that there was a secret quest to obtain it. Blizzard did not comment on whether it could be obtained or not.

[Nat Pagle's Guide to Extreme Anglin']; all of which mention the weapon. Information from these sources suggested that Asbhringer was somehow lost, and that Nat Pagle and Prince Tortheldrin knew the location; however, neither shared their knowledge. Players continued to search feverishly for a secret quest that would reward Ashbringer.

In February 2006 the World of Warcraft, China website published a promotional image for the then-upcoming patch 1.11, featuring a character wielding Ashbringer. This immediately drew player speculation that Ashbringer would finally be obtainable, until a European CM and Eyonix clarified it would not be:

It's true that currently Ashbringer is not in the game, although one day in the future it will be, but not until after there is an awesome legendary item for casters. ;)

This was the first official statement that Ashbringer was not obtainable by players, and quashed rumors. The caster legendary item Eyonix hinted at was [Atiesh, Greatstaff of the Guardian], added later in patch 1.11.0. 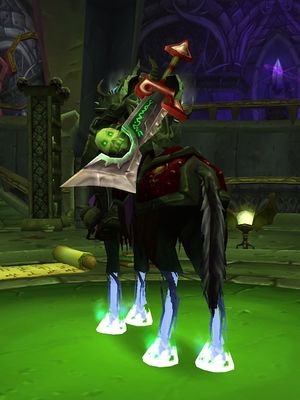 [Corrupted Ashbringer] on his back in Acherus: The Ebon Hold

In the original version of the Naxxramas raid, players encountered Highlord Alexandros Mograine as a death knight of the Four Horsemen. He wielded the

[Corrupted Ashbringer], which could be looted from the Horsemen. When equipped, Scarlet Crusade NPCs become friendly, and Argent Dawn NPCs become hostile. A scripted event can be triggered upon entering the cathedral in the Scarlet Monastery with it equipped.

In the (non-canon) event, Scarlet Commander Mograine welcomes the player as the crusaders bow before him or her. Unexpectedly, the spirit of Mograine's father, Highlord Mograine, appears in full Dreadnaught's Battlegear and slays his son for his betrayal. The Highlord frees High Inquisitor Fairbanks' spirit from his undead form and disappears. Fairbanks proceeds to tell the story of Renault's betrayal and says that the Corrupted Ashbringer is beyond redeeming and that Alexandros' other son resides in Outland, and can forge a new one.

This would later be retconned in Wrath of the Lich King: Mograine's second son was revealed to be Darion Mograine, who has never resided in Outland. 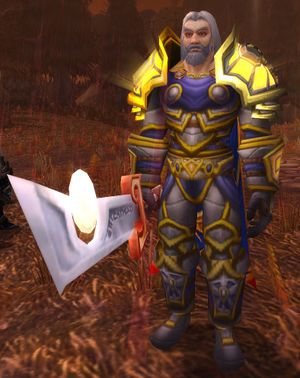 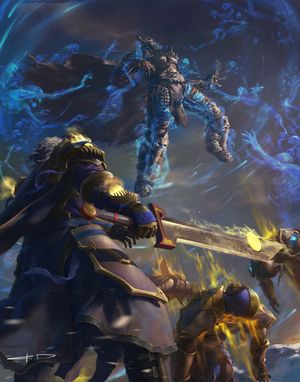 Tirion with Ashbringer during the fall of the Lich King.

Players can find Darion Mograine, with the Corrupted Ashbringer, in the death knight starting area of Acherus.

At the Lich King's command, Darion launched an attack on the Argent Dawn at Light's Hope Chapel. In the battle that ensued, the Corrupted Ashbringer began to turn on Darion. When the death knights were forced to surrender, Tirion Fordring revealed that the Lich King knowingly sent Darion and his knights into a trap. Shortly thereafter, the Lich King himself appeared. Darion relinquished the Ashbringer to Tirion, which became purified in his grasp, forcing the Lich King to retreat.

In Howling Fjord, Alliance players can complete a quest to retrieve a

[Sacred Artifact] from Utgarde Catacombs. Upon returning it to Valgarde, a nearby cleric unmasks himself as Tirion Fordring and equips the artifact, which is revealed to be the Ashbringer. The dialogue explains that Tirion was convinced by his advisors to travel to Valgarde in disguise, while Ares the Oathbound was entrusted to transport the sword separately to Northrend. This was a security precaution to protect the leader of the Crusade, should the Lich King's forces go after the sword's keeper in an attempt to kill Tirion. Fordring can later be seen wielding the Ashbringer in Icecrown.

During the final battle against the Lich King in Icecrown Citadel, Tirion Fordring shattered Frostmourne with Ashbringer, releasing the souls trapped within.

After the victorious march on the Icecrown Citadel, Tirion returned to his old home - Hearthglen. There, he began establishing a new Argent Crusade base, and the Ashbringer, the sword that shattered the Frostmourne itself, serves as a symbol of a new dawn for everyone.

Ashbringer is the artifact used by retribution paladins in Legion. Tirion was captured by the Legion and died after being tortured, though an adventuring paladin was able to recover the Ashbringer at the Broken Shore. Before he died, Tirion declared the adventurer the new Ashbringer and the sword's wielder.

After Sargeras plunged his sword into Azeroth, Ashbringer's power (along with that of all Legion artifacts) was completely drained to neutralize the wound. 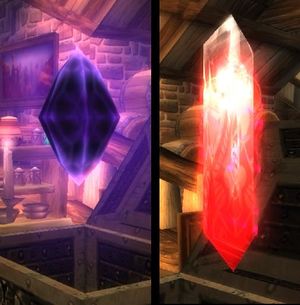 The dark crystal from which the Ashbringer would be crafted, before and after its purification.

The Ashbringer may have been originally intended to be in the game during Classic. Parts of what seems to be a scrapped quest line can be pieced together:

The implementation of the Ashbringer was likely delayed so that the story could be explored in Naxxramas, released in patch 1.11.

[Heart of Corruption], an artifact appearance for the Ashbringer Legion artifact. The appearance is similar to the original

[65] The Legacy of the Ashbringer

In the Corrupted Ashbringer Scarlet Monastery event from Classic, Fairbanks mentions that Highlord Mograine had a second son in Outland that could forge a new Ashbringer.

During The Burning Crusade, many players speculated David Wayne was this second son assuming a fake name, considering he's human, he left the Sons of Lothar to be part of "something larger" (which is left unspecified), his presence in Outland, and his skills as a blacksmith. Wrath of the Lich King later revealed Darion Mograine to be Alexandros' second son. Fairbanks' statement about a son in Outland was incorrect or retconned.