The conflict in Northern Kalimdor was one of the three main fronts of the war (the others being Central Kalimdor and Lordaeron). The Horde, under new leadership of Garrosh Hellscream, launched many major campaigns into Darkshore and Ashenvale, the ancient homeland of the night elves, in order to gain more lumber for the Horde, due to the depletion of resources in Durotar and the Barrens. These campaigns happened in two main stages, both happening after the shattering of the world. 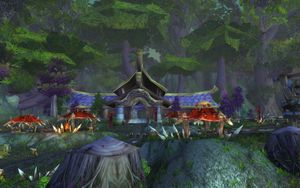 The orcish invasion of Ashenvale.

With Ashenvale's elven defenses weakened,[citation needed]  newly-appointed Warchief of the Horde Garrosh Hellscream finally decided to take the night elven forest for the Horde. Garrosh personally led his troops into the neighboring borders of Ashenvale.

While his Warsong clan had made considerable progress over the course of Warchief Thrall's reign, it is a far cry from the ambitions that Warchief Hellscream desired to achieve. Garrosh planned to create a massive city in the heart of the forest, one with the potential to rival Orgrimmar in size and power. With rich minerals ripe for the taking, and all of the tools needed to see his people grow, Garrosh surged viciously through the kaldorei ranks and cut a swathe of destruction straight to the Silverwing Outpost. Having brought down a number of tamed proto-drakes and magnataur captives from Northrend that he domesticated by holding their young hostage and with goblins of the Bilgewater Cartel on his side, Garrosh planned to see his dreams of expansion realized.

His attack on the Outpost results in a decisive Horde victory. Garrosh reflects on how the forest that gave his father such harsh resistance is falling, piece by piece, and wonders what the mighty Grom would have made of this triumph. He concludes that not even Thrall could deny his prowess at this point, and will hail him as the champion of the orcish race and the entire Horde. Garrosh's plan is twofold — he had gained knowledge of a meeting between the leaders of the Alliance and strikes at this point in order to lure out Tyrande Whisperwind. As he had expected, the priestess — along with Alliance reinforcements — arrives on the scene to relieve the waning sentinels, though the Horde unleashes the magnataur upon the Alliance's ranks. In the ensuing chaos, Tyrande is struck down and wounded by orc archers. Confident in a victory, Garrosh himself enters the fray.

The battle is interrupted by the arrival of worgen reinforcements led by Varian Wrynn and Genn Greymane, who proceed to fight back several magnataur. On several occasions, Garrosh and Varian clashed and did battle; with both leaders matching each other's attack, blow by blow, and killing all who interfered with their duel. Though evenly matched at first, Varian eventually gained an advantage. Varian had been fighting with an in-explicit focus and unyielding vigor. While Garrosh tired, Varian was still full of stamina, which allowed Varian to press on his attack. Garrosh is fought back at this point, and Varian succeeds in wounding him and disarming Gorehowl. A dying magnataur separates the two combatants, and Garrosh composes himself. He prepares to rush at Varian once more, though is held back by several Kor'kron; urging Garrosh to retreat. Garrosh grudgingly complies, though not before swearing to kill Varian himself.[1]

Since then, General Shandris Feathermoon has taken advantage of their victory at Ashenvale to commission more fortifications and outposts at Ashenvale's Alliance controlled borders.[1] Yet the night elves' troubles are far from over, as an enormous volcano has erupted in central Ashenvale. As the night elves struggle to deal with the chaos caused by the Cataclysm, the Horde is seizing what it perceives to be a golden opportunity.

Following the Cataclysm, Garrosh took on the mantle of Warchief, and as one of his first campaigns, he led the Horde in taking Azshara for the Horde, with the help of his new goblin allies. After a successful attack on Talrendis Point in Azshara, the Horde was able to take control of all of Azshara. As the grip of the Horde tightened in northern Kalimdor, the night elves began to test the defenses of the Horde outposts in Ashenvale, attempting to siege both the Mor'shan Ramparts and Splintertree Post.[2] To counter this move by the Alliance, the Horde sent out a call for able-bodied warriors from the Northern Barrens. The Heroes were quickly put to work at the ramparts by Kadrak, who tasked the adventurers with killing the Ashenvale Skirmishers and Bowmen attacking the post. In the brief lull in battle which followed, the Horde adventurers assisted in gathering resources at the Warsong Labor Camp, bringing supplies back to the Ramparts to help repair. Finally, the adventurers killed the Sentinel Commander at Fallen Sky Lake.[3]

Pushing north from the Ramparts, the Horde took control of Silverwing Outpost with a small raiding group, thus capturing the night elves forward command post in the region, and in the process of taking the post, many sentinels were killed along with one of the Silverwing Commanders. Kodo caravans pushed north from the recaptured Mor'shan Ramparts, breaking the siege of Splintertree Post. The breaking of the siege was followed by a string of victories, between an orcish warlock poisoning the Forest Heart with the blood of fallen sentinels,[4] and the usage of fel magic to kill off the remains of the night elven besiegers.[5]

Although the adventurers who assisted the warlock were sent to Hellscream for judgment, they were pardoned from their crimes, on the condition that the warlock who tasked them with using fel magic would be killed. The adventurers complied, and the warlock (Who turned out to be a demon), was killed. However, the forest heart remained poisoned until much later in the war, which sapped the energy and the spirit of the night elves and their ancient allies. Next, the Horde adventurers were tasked with helping Horde covert operatives in dismantling the siege of Warsong Lumber Camp.[6] Despite the death of the sin'dorei ambassador stationed in the keep, the Horde was successful in breaking the siege. With the successful defense of Splintertree and the Lumber Camp, the Horde was free to continue the push west.

After the sieges of Splintertree and Warsong Lumber Camp were broken, eastern Ashenvale was under complete Horde control, save for Forest Song. The Horde armies pressed westward, taking control of Silverwind Refuge by using a corrupted form of a water elemental,[7] and also began an attack on Raynewood Retreat, bypassing the defenses of Raynewood Tower, and killing many of the druids and sentinels stationed at the Retreat. However, the Horde was not able to deliver the finishing blow at Raynewood, as the Druid leader continued to revive the Dryad defenders of the post. The Horde even started firebombing Astranaar,[8] and with victory in sight, they moved in to take Maestra's Post, one of the few remaining Alliance encampments. If Maestra's Post fell, all of Darkshore and eventually Teldrassil would be vulnerable to continued Horde attacks. While the siege of Maestra's Post was beginning, the goblin engineers at the captured Alliance base of Silverwind Refuge were finishing up a giant bomb, engineered with the same new type of blasting powder used in the firebombing of Astranaar. This bomb was designed to be used on the night elves in Stonetalon Mountains, who were defending the mountains from the invading armies of Krom'gar Fortress. Many of the Horde battalions started to move south to reinforce Krom'gar's army in Stonetalon, bringing the bomb south with them.

This success was short-lived, however, as the mobilized armies of the Darnassus were able to break the siege of Maestra's Post,[9] and pushed the Horde out of Astranaar, also setting out the fires that the Horde had started.[10] By pushing the Horde out of the city of Astranaar, the Alliance armies were able to free up enough resources to reinforce Raynewood retreat. The Alliance adventurers and sentinels took on the form of the Ancient spirit of Shadumbra to break the siege, killing almost all of the Horde forces attacking in a brutal display of druidic magic.[11] Shortly after the siege of Rayneewood was broken, Alliance heroes rebuilt Dartol's Rod which allowed them control over the furbolgs that the Horde had imprisoned near Silverwind refuge.[12] The Alliance heroes commanded the controlled furbolgs to weaken the Horde army there enough to allow the Sentinel's to retake the camp. The Alliance military moved back eastward, cleansing the tainted forest heart,[13] reinforcing Forest Song, and even renewing the siege of the Warsong Lumber Camp. At this point, only pockets of Horde resistance remained, bringing the war full circle, in favor of the Alliance.

During the siege of Orgrimmar, the night elven sentinels were probably able to push through eastern Ashenvale as they reached Orgrimmar, bringing the gates of the city down with Glaive throwers. The treaty that followed Azshara remains firmly in the hands of the Horde after the battle of Talrendis Point, and the treaty of Orgrimmar also re-affirmed the Horde's claims on Azshara, in return for the relinquishment of Horde outposts in Ashenvale.