From Wowpedia
(Redirected from Ashvane Company)
Jump to: navigation, search

The Ashvane Trading Company (or simply Ashvane Company[1][2] and later Ashvane Loyalists)[3][4] is a Kul Tiran shipping and manufacturing company based out of the city of Boralus and owned by House Ashvane. The company involves itself in a large number of ventures, including weapons manufacturing, shipping, security, smuggling, and piracy, among others. Characterized by its ruthless business practices and disregard for moral and lawful conduct, the Ashvane Company sits atop a vast criminal empire, hoarding power and profit on a grand scale.

The beginning of the Blood War and the appearance of Azerite have both presented major opportunities for the organization. Under the leadership of Lady Priscilla Ashvane, the company allied with the Irontide Raiders and other pirates, while secretly plotting a coup against House Proudmoore. This would culminate in the Siege of Boralus, which saw the company and its allies defeated. Despite these setbacks, the Ashvane Company retains numerous holdings across Kul Tiras and beyond.

It is unknown when exactly the Ashvane Trading Company was founded, though by the Second War it was a major producer of weapons and ammunition for the Kul Tiran navy.[5]

By the time of the Blood War, the Ashvane Company enjoyed a monopoly on many areas of Kul Tiras's economy, particularly within Boralus and Tiragarde Sound. This was advanced by Lady Priscilla Ashvane's personal relationship with Lord Admiral Katherine Proudmoore, which granted the company political influence and the ability to act with impunity. The company took a strong interest in the newly-discovered Azerite, which it researched and quickly weaponized for its own ends.

When Lady Jaina Proudmoore returned to Kul Tiras on behalf of the Alliance, it was Priscilla Ashvane who pushed for a sentence of death for high treason. With Katherine Proudmoore's consent, the Ashvane Company took Jaina into custody, eventually delivering her to pirates to be shipped to Fate's End.[6] Members of Jaina's party were also taken and sent to Tol Dagor, a private offshore prison operated by the Ashvane Company. These inmates would later be liberated in a prison revolt.

At the same time, in secret, Lady Ashvane planned to use the wealth and power of the company to eventually seize control of Boralus. She secretly allied her organization with the Irontide Raiders of Harlan Sweete, based in Freehold. The pirates were armed with company-made Azerite weapons and sent against the House Proudmoore defenders in the region. Though Ashvane and her company worked to undermine her power, Lord Admiral Katherine and the wider populace remained largely oblivious to this treachery.[7] 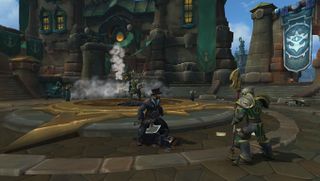 The Ashvane coup in Unity Square

An investigation, headed by Taelia of the Proudmoore Guard, Captain Flynn Fairwind, and an emissary of the Alliance slowly uncovered the Ashvane Company's dealings, as well as their plans to seize power. Together, they seriously disrupted operations at the Ashvane Foundry and struck at the pirates of Freehold. They also discovered that Lady Ashvane had hired the Irontide to assault Daelin's Gate and break into Tiragarde Sound.[8] With the company's new Azerite weaponry, the pirates easily breached the gate's defenses, but were fought off by Kul Tiran forces.

Armed with evidence of the treachery of Lady Ashvane and her company, Taelia and her allies returned to Boralus to warn the Lord Admiral. Confronting Priscilla before an assembly in Unity Square, Taelia revealed the gathered evidence, causing Ashvane herself to flee. Lady Ashvane escaped the scene, as company loyalists and city guards clashed throughout the area. In the wake of the incident, Lady Ashvane prepared for her next move against Boralus. Possibly due to its power and influence, the Ashvane Company itself was not shut down outright; it was, however, ordered to cease all weapons production, an order which it blatantly ignored.[9]

Later, Katherine Proudmoore ordered the offices of the company within Boralus to be raided, in search of information on her missing daughter, Jaina.[10] As Katherine ventured to the Blighted Lands to rescue Jaina, the Ashvane Company gathered its strength for a major attack on Boralus itself. The Lord Admiral and her daughter arrived back in the city to find it under siege by Company and pirate forces. With the help of Alliance heroes, the city's defenders cut through their enemies and drove them from Boralus. A second wave of ships, led by Lady Ashvane herself, soon advanced on the harbor. Too weak to fend off another assault, Boralus's final hope lay with Jaina, who successfully summoned the Kul Tiran fleet home in time to confront the Ashvane armada.[11]

Outnumbered and outgunned, Lady Ashvane and her forces surrendered, decisively ending their plans on Boralus. Despite the loss of their leader and much of their strength, the Company remained active in Tiragarde Sound, particularly in harvesting Azerite from open wounds in the region.[12]

Warchief Sylvanas Windrunner later ordered the Horde to free Lady Ashvane from prison — presumably to work out some sort of alliance.[13] Lady Ashvane however, eventually revealed she had aligned herself with Queen Azshara and had been supplying her naga with Azerite weapons.[14] Although she was protected by Azshara from the wrath of the Horde and Alliance, Azshara turned Priscilla Ashvane into a sea monster and she was eventually slain during the adventurers' raid on Azshara's Eternal Palace.[15]

The Ashvane Trading Company maintains offices and installations across Tiragarde Sound and beyond, with its headquarters located in the Ashvane Company Yards of Boralus. Other presences include: 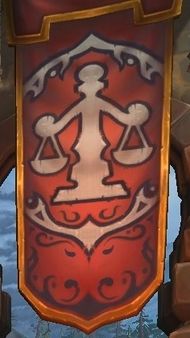 Banner used by the Ashvane Company